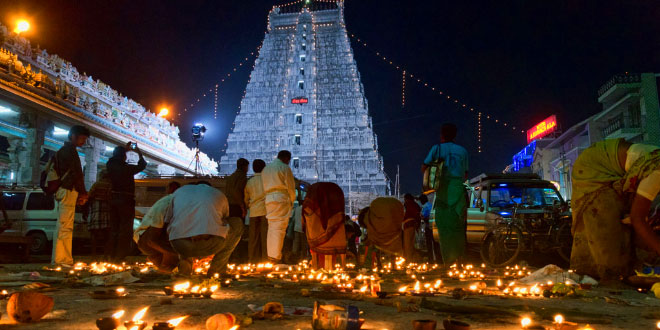 Karthigai Deepam is the popular festival of southern part of India and is the oldest festival with splendid and elaborated celebrations all over the state of Tamil Nadu. The festival is also termed as “Festival of Lights” and is also considered the extension of Diwali Festival.

Once upon a time the Devas, the heavenly immortals, put in their best possible efforts to have a complete Darshan of Lord Shiva.

During this process Lord Brahma took the form of a swan and Lord Vishnu in the form of a boar conducted an extensive search in the sky and in the neither world did they find him.

Lord Shiva asked Lord Brahma and Lord Vishnu to find out the exact location of his head and his feet. Since Lord Shiva took a gigantic form, they were not able to find him anywhere. Then Lord Shiva appeared before them in the form of a flaming light whose ends cannot be defined on the hill of Thiruvannamalai. Therefore, this festival is also known as Annamalai Deepam. Here, a special torch is lighted on the zenith of the hill and it is believed that Lord Shiva’s Jyoti will be visible on this day. The festival is celebrated in a special manner in Thiruvannamalai.

Lord Muruga took the form of six babies in a lake called “Saravana Poigai”. On this day, Parvati (his mother) united all his six forms and so Lord Muruga has six faces. Special pujas are performed to Lord Muruga on this day.

Karthigai Deepam is the oldest festivals celebrated in Tamil Nadu and Southern India, even before Diwali and Navarathri celebrations. The reference of Karthigai Deepam can be found in many ancient Tamil literature like ‘Ahananuru’ (200 B.C. to 300 A.D.) ‘Tolkappiyam’ that dates back to 2,000 or 2,500 BC, ‘Jeevakachintamani’, an epic written by Jain poet, Thiruthakka Thevar, in the Sangam period, ‘Karnarpadu’, ‘Kalavazhi Narpadu’ dating around 1,000 BC and ‘Pazhamozhi’, even the famous poetess Avaiyyar, also mentions about the festival in her literary work.

Like Diwali, there is general practice of cleaning houses and decking up houses beautifully with stunning illuminations and multihued ‘Kolams’ or Rangoli. People place lamps or Agal in their puja room and place them at different places in the house after the completion of ‘Deeparathana’ (puja). The streets provide visual treat on this festival with lamps all around.

Karthigai Deepam is the major festival of Tamil Nadu and is also referred as Annamalai Deepam. The festival is celebrated for nine auspicious days with each day having its own special importance. There are special celebrations organized at Arunachaleswarar Temple amidst Annamali Hills in Thiruvannamalai.

The celebrations begin with the flag hoisting on the Uttradam day and the festivity continues for nine Kathigai Deepam days. The popular Bharani Deepam in five ‘agantams’ is lit in Arunachaleswarar’s Sannithi in early morning hours of the tenth day. Devotees move to the Annamali Hills to worship the Bharani Deepam on the final day of the festival. It is believed that the flame of the lamp does not sputter on this day and divulge into the form of Lord Muruga, reaching up to the sky.

The Bharani Deepam is actually a colossal circular metal vessel with a capacity to hold about 2,000 liters of ghee, a height of five and half feet and diameter of five feet. The wick of the lamp itself is made up of 30m of ‘Ghada’ cloth burnt using 2 kilos of camphor. It is claimed that on the night of ‘Karthigai Pournami’, when the lamp is lit it can be seen across an area of 35km around the shrine.

In the evening, the Pancha Murthis are brought to the Katchi Mandapam. At dusk (Pradosham), with the Karthigai day harmonizing with full moon day, the deity, Ardhanareeswarar, is taken in a grand procession on the decorated vehicle to this place with the five deepams, which are put in a big receptacle near the flag staff. At the same time, the guiding light on the hill is lit and huge crowd raise cry in a loud voice “Annamalaikku Arogara.” It is a sight for the Gods! The lighting of the beacon on the top of the hill is the finale of ten days of merriment in the town.

The festival of Lights, Karthigai Deepam is observed in the month of November or December. The burning lamp with the divine flame is considered an auspicious symbol and believed to fend off evil forces and escort ecstasy and prosperity.

According to Tamil calendar the festival falls in the Tamil month of Karthigai. Karthigai Deepam is celebrated on the full moon day of the Karthigai month which coincides with the Krithigai Star. Even the name Karithigai of this month was also derived on the basis of the name of the star Krithigai. The month of Karthigai is of special importance as it is believed that Lord Muruga, the divine light of Lord Shiva, took his form during this month.