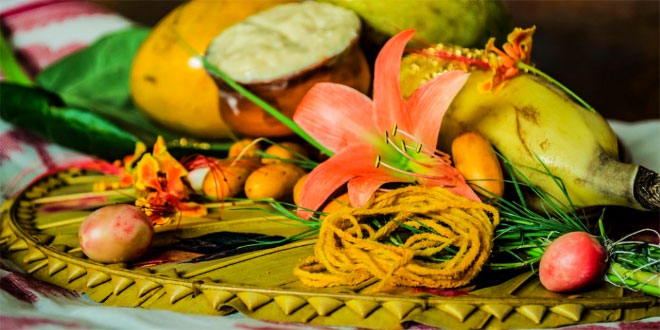 India is a culturally rich land. Many amazing festivals are celebrated here of which the citizens have not even heard about. A beautiful festival called ‘Jamai Sasthi‘ is celebrated in Kolkata which displays beautiful bonding of son-in-law with his in-laws. The traditional festival of Jamai Sasthi originated ages ago as a part of a women’s socio – religious duty. The son-in-law is called ‘Jamai’ and ‘Sasthi’ means sixth, thus the festival is observed on sixth day of shukla paksh in Jyestha month of traditional Hindu calendar.

This popular social custom lays foundation of a strong family bonding. All the son-in-laws get a treat from his in-laws or ‘Shoshur bari’. The day is celebrated since older days by the Hindu families all over West Bengal. A party is organized the in-laws for their daughter and her husband.

Mother-in-laws cook special dishes and invite their daughter and Sons-in-law to honor them with a feast that essentially consists of Hilsa fish. The son-in-law is welcomed by his in-laws in traditional way with a “phota” of curd on his forehead and a yellow thread is tied on the right hand wrist and forehead. The thread is colored yellow with turmeric and is called ‘Sasthi Suto’ which have blessing of Maa Sasthi who takes care of children. Son-in-law is presented gifts, sweets and fruits and he too gives gifts to the mother-in-law. Then mother-in-law performs the ritual in which a plate having six fruits is touched with the Jamai’s forehead.

The day is observed as Aranya Sasthi in many other regions. The festival plays vital role in bringing the couple especially the son-in-law (Jamai) closer to the in-law family, thus helps in making family ties safe and sound. Bengalis are famous for their love for food. After performing the rituals a small feast is organized. Best and favourite delicacies of one’s son-in-law are prepared. The guests are then served exotic Bengali dishes. Various fish delicacies, prawn malaikari and the most famous Bengali sweet ‘Sandesh’ are a must. The mother-in-law fanned her son-in-law with a palm leaf while he gorges on his food.

Son-in-laws are the centre of everybody’s attention on the day. He thoroughly enjoys and loves the attention he is getting from his in-laws. The social activity was more intense in earlier times.