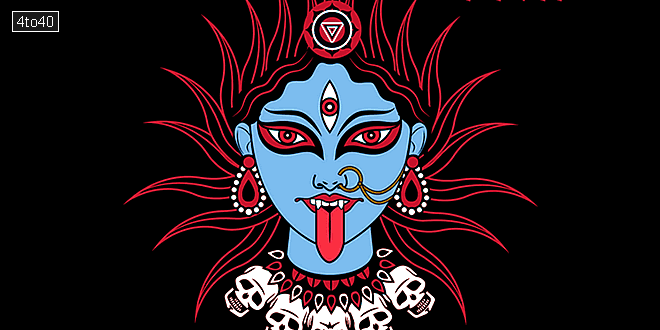 Kali Puja: Maa Kali is the fearful and ferocious form of Maa Durga. She is usually shown with her feet on the chest of Lord Shiva and wearing a garland of skulls. She symbolizes the darker side of life and epitomizes strength or “Shakti“. Kali is worshiped on the night of Kartik Amavasya in October / November. The day is also celebrated as Shyama Kali, the first 10 avatars of Devi Durga. The reason behind worshipping Kali is destroying all evil both that lies in the outside world and within us.

Kali became popular as a powerful goddess with the composition of the text Devi Mahatmya in the 5th and the 6th century AD. The legend goes that two demons, Shambhu and Nishambhu disturbed the peace of Lord Indra. After endless battles when the gods failed, they sought help from Lord Shiva and Parvati. The gods sought protection of Maa Durga or Shakti. Kali was born out of Durga’s brow as Kal Bhoi Nashini.

Along with her two escorts, Dakini and Jogini, she was meant to destroy all evils and the growing cruelty of demons. It is believed that Kaali was so much engrossed in the killing spree that she went on killing everything within her sight. To stop this, Lord Shiva, threw himself under her feet. She was so shocked with this act of Lord Shiva, that she stuck her tongue out in disbelief. Hence we have the common image of Kali standing with her feet on Shiva’s chest and her tongue out.

Kali Puja is celebrated with lots of gusto and fanfare in Bengal after Durga Puja during the time of Diwali. It is believed that Maharaja Krishnan Chandra of Nawadweep was the first to celebrate Kali Puja in his territory. Everyone was ordered to celebrate Kali puja and thus 10,000 images of Kali were worshipped. Ratanti Kali Puja was celebrated in ancient times before the present Kali puja. It is believed that the present form of Kali is due to a dream by a distinguished scholar of Indian charms and black magic or ‘Tantra’ and the author of Tantric Saar, Krishnananda Agambagish, a contemporary of Lord Chaitanya. In his dream he was ordered to make her image after the first figure he saw in the morning. At dawn, Krishnanand saw a dark complexioned maid with left hand protruding and making cow dung cakes with her right hand. Her body was glowing with white dots. The vermillion spread over her forehead while she was wiping the sweat from her forehead. The hair was untidy. When she came face to face with an elderly Krishnananda, she bit her tongue in shame. This posture of the housemaid was later utilized to envisage the idol of Goddess Kali. Thus was formed the image of Kali.

Kali Puja is a major festival for the people of Bengal after Durga Puja. It is celebrated with gusto and enthusiasm. Like Diwali, people in Bengal light lamps, and fire crackers to welcome Ma Kali. Houses are decorated and rangoli is drawn in front of the houses. Kali puja is carried out late in the night. People seek he blessings of Maa Kali during the puja.

The popular forms of Kali are Shyama, Adya Maa, Tara Maa and Dakshina Kalika, Chamundi. There are other forms as well. They are known as Bhadrakali who is gentle and Shyamashana Kali who stays at the cremation ground. Kali has four arms and is represented with perhaps the fiercest creatures among all the deities in the world. She has a sword in one hand and a demon’s head on the other. Her other two hands bless her devotees. Her eyes are red and her body is smeared with blood. Her black complexion represents the transcendental nature. Kali is free from all artificial covering beyond all maya or false consciousness. She has infinite knowledge which is represented by the garland o fifty skulls depicting 50 letters in the Sanskrit alphabet. Her inner purity is represented by her white teeth while her omnivorous nature is depicted in her protruding tongue. Three modes of time, the past, present and future are represented by her three eyes.

Dakshineswar Temple was built by Rani Rasmoni between 1847 and 1855. In 1847, Rani Rasmoni, the wealthy widow expressed her desire to visit Banaras to show her devotion for the Mother Goddess. Since there were no rail lines between Banaras and Kolkata, wealthy people would travel by boat rather than by road. Rani Rasmoni’s fleet included a total of twenty four boats carrying relatives, servants and supplies. However, it is believed that he night before the journey she saw a dream where Goddess Kali ordered her to built a temple near the banks of the Ganga and arrange for her worship there. “Then I shall manifest myself in the image and accept worship at that place.” Rani Rasmoni immediately followed her dream and purchased land near the banks of the Ganges. Work began immediately and the temple was completed in 1855. The temple also has images of Shiva and Radha and Krishna. Ramkrishna serves as the head priest of the temple who brought great fame to the temple. Today hundreds of devotees visit the temple everyday and on any religious festival, thousands throng the place.

The Kalighat temple was built in 1809 on the site of an ancient temple. The legend goes that a finger of Sati, wife of Lord Shiva, fell there. The temple is named after the anglicized name of Calcutta called Kalikata given by the English. The shrine is dedicated to the destructive side of Shiva. Every morning a goat is sacrificed to quench her thirst for blood. It is an important pilgrimage site and hundreds of people visit the temple everyday to offer prayers.

The Kamakhya temple in Assam is one of the Shakti Peethams associated with Shiva and Daksha Yagna. It is located in Guwahati, on Neelachala Parvat. Assam has been associated with Tantric practices and worship of Shakti. The temple was rebuilt in the 17h century by King Nara Narayana, of Cooch Bihar after it was destroyed in the early 16th century. An ancient work in Sanskrit the Kalika Purana, describes Kamakhya as the yielder of all desires, the young bride of Shiva, and the giver of salvation.

Tarapith is located 300 miles from Calcutta on the banks of the Dwarka River in Birbhum in West Bengal. With passage of time, the temple that was built by Vasistha got buried under the earth. The present temple was built by a merchant Joybroto who in his sleep received directions from Tara Maa to uncover the brahmashila, or the sacred stone, and set it up as a shrine in a proper place.