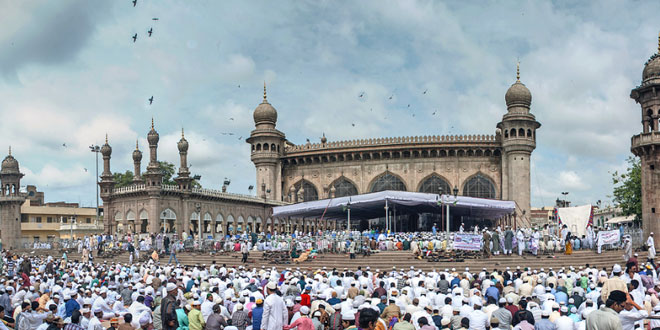 Jamat-Ul-Vida: Last Friday of Ramzan – Ramzan is the holy month wherein Muslims observe a fast. In this pious period, Jamat-Ul-Vida is an extremely auspicious day for Muslims. As per Islamic history and religion, it is the last ‘Jumma’ prayer of the month. In other words, it marks the last Friday of Ramzan. Etymologically, it arises from the words ‘juma’ and ‘wida’ which mean “gathering” and “farewell” respectively. This means that on the last Friday, people gather to bid farewell to the holy month of Ramzan which is close to its end and pray for a peaceful year ahead.

On this day, the Muslims are required to attend the congregation instead of the usual mid-day prayer of Friday. They gather in huge numbers to recite the holy Quran for the whole day. While it is obligatory for the men to attend the congregation, it is not compulsory for the Muslim women. In 2013, the largest congregation was conducted in the city of Hyderabad at the Mecca Masjid, which is one of the biggest mosques in the country. This day also sees Majlis-e-Ittehadul Muslimeen organising the ‘Quran day’ meeting at Mecca Masjid annually in the same place.

Muslims visit mosques in their respective cities and pray for a peaceful and better world. They do so in their clean best clothes and skull caps, but only after having a bath in the morning. Very special prayers are also offered by them. They seek forgiveness for the sins they have committed and pray for guidance in their future life. Devotees also pray for peace for their loved departed ones. Priests encourage people to follow the words of the holy Quran which would help them in their life and also after death. It is believed that if on this day one feeds the poor, he would be rewarded in the future. Also, families get together and cook special feasts.

Verse 9 of Chapter 62 of the Holy Quran mentions the gathering of such a congregation on the day of Friday. Muslims consider Jamat-Ul-Vida to be one of the most important days that falls in the year. Not only this, it is also the second holiest day in the month of Ramzan only after the day of Eid-ul-Fitr, the day on which the month-long fast is broken. It is believed that someone who worships Allah on Friday receives his protection for an entire week.

Also ‘namaaz‘ is done on two consecutive Fridays; people get to understand their real selves and conscience tells about the right path that one should follow. It is believed that on Jamat-Ul-Vida, prayers are accepted by Allah. Mosques usually erect tents outside the main building in order to create additional area to accommodate the large number of gathering. All in all, this day involves religious reverence as mosques are flooded with devotees seeking divine blessings. Moreover, greater and stronger unity is developed amongst the Muslim community in their gathering.