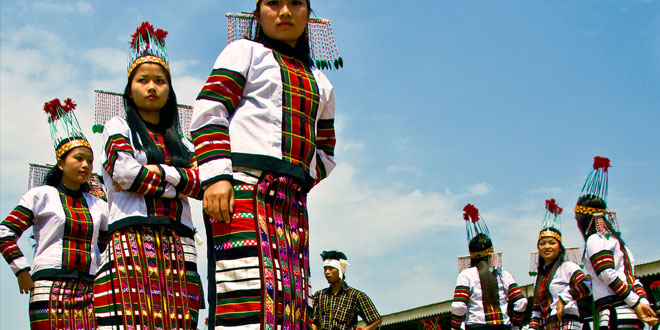 The Chapchar Kut is a festival of Mizoram, India. It is celebrated during March after completion of their most arduous task of Jhum operation i.e., jungle-clearing (clearing of the remnants of burning). It is a spring festival celebrated with great fervour and gaiety. Chapchar Kut is estimated to have started in 1450-1700 A.D. in a village called Suaipui. Chapchar Kut was discouraged when the Missionaries came to Mizoram as it was felt that it did not adhere to Christian values, however it was revived in 1973 on a mass scale sans animistic practice and Alcohol. Chapchar Kut is now held annually in the Month of March. Chapchar Kut is one of three annual festivals of the Mizos celebrated to mark three different stages of the agricultural cycle. The other two are Mim Kut and Pawl Kut, also revived in the last century.

Oral traditions say Chapchar Kut was first celebrated in Seipui village in adjoining Myanmar that has a sizeable population of Mizos and their ethnic cousins. Chapchar Kut used to be celebrated to thank the gods for saving the people from harm during the clearing of forest on hill slopes for jhum cultivation at the beginning of a year.

Today, the festival is observed in the last part of February or the early part of March when the trees and bamboos felled for jhum are left to dry and the shifting cultivators have time to relax and enjoy.

In local Mizoram parlance, kut means festival. There are three Kuts celebrated in the state – Chapchar Kut, Mim Kut and Pawl Kut. All the three festivals are connected with agricultural activities.

The festivals are celebrated to mark the arrival of spring with feasts and traditional dances.

The festival begins with Kut Puipate or the inauguration ceremony followed by the Then Katna, where the dance groups arrange themselves on the stadium.

Once then Hnihna begins, the elderly members of the society come dressed in their traditional costumes, representing the individual tribes of the region and take part in a fantastic procession called the Kut rore.

This is followed by the various tribal dances, the most important being the Cheraw or the bamboo dance. The function ends with the Then Thumna or the event where the local singers once again present the traditional popular numbers and are joined by the cheering crowd.

Chapchar Kut is celebrated in the month of March. It marks the beginning of spring when the nature starts playing with colors. This heralds the festive mood in the lives of Mizos and they prepare themselves to celebrate Chapchar Kut, the festival of happiness. It is considered to be the most important traditional festival of Mizoram and is celebrated with great pomp and splendor.

This festival is one of the oldest festivals of Mizoram. On this occasion, farmers cut bamboo forests to make place for jhum or seasonal farming. This is the season, in which they wait for the chopped bamboo heaps to dry under sun before being burnt, and this process is termed as Chapchar. While, Kut means festival, as the farmers have nothing else to do during the season.

People wear colorful traditional clothes and hats made from beads and parrots’ feathers. In this festival they don’t wear any shoes. A traditional bamboo dance is also performed where only women participate while the men sit on the ground and beat the bamboos against each other.

Chapchar Kut is celebrated in all the Mizo villages and is a very important cultural tradition in the society. Each village develops its own brand of celebration according to their time, idiom and ethos over the years. The celebrations are carried out for four to five days.

This colorful cultural festival of Mizoram – Chapchar Kut has nowadays become the most popular and gazetted holiday in the state.