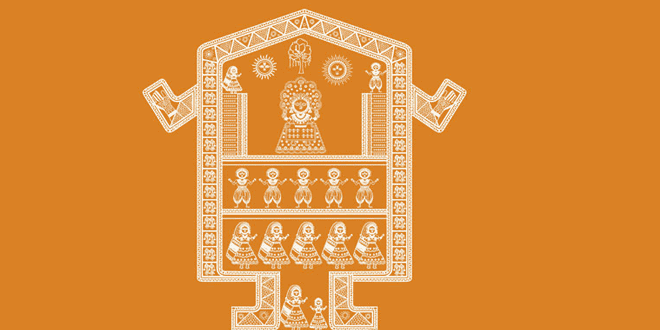 Ahoi Ashtami is celebrated in the Hindu month of Kartik, which falls approximately between September and October according to the English Gregorian calendar. Ahoi Ashtami is widely observed in the Northern states of India. It usually falls on the eight day of the waning period of the moon (the dark fortnight).

On the Ahoi Ashtami day, women fast from morning to evening and pray for the welfare and long life of their son(s). They usually draw a cub or buy a drawing of a cub and pray before it. Prayers are offered to the Ahoi Ashtami Bhagawati on this day.

Observance of Vrat or fasting is the highlight of Ahoi Ashtami. The Women in the North of India wake up early in the morning, even before sunrise, and have some refreshment before going to the temple to offer their prayers. The fasting starts after a prayer in the temple and it goes on until the moon appears. Some women break their fast as soon as the first stars show up in the sky.

A picture of Ahoi Ma or Ahoi Bhagawati is drawn and painted on the wall. Some women also draw the picture of a cub. Prints or paintings of Ahoi Mata are now placed instead of a hand drawing or painting. They place a bowl of water before it. A red thread or a thread dipped / dyed in vermilion is tied around the bowl making sure it is not twisted while doing so. The ends of the thread are dipped in turmeric. This decorated bowl is kept to the left of the picture of Ahoi Mata.

Certain families make a garlands out of silver or gold coins. When there is new child born in the family or when their son gets marries, they add a new coin to the garland. They keep this garland safe so as to be used for the coming years. They use the garland year after year for the Ahoi Mata prayers. Thus the observance of Ahoi Ashtami is passed on from one generation to another to keep up the tradition.

There is a famous story about the observance or celebration of the Ahoi Ashtami festival. Once there lived a woman in a village. She had seven sons. In the month of Kartik one day, while she was digging the soil in a nearby forest, her axe accidentally fell into a den and killed a cub sleeping inside. After some time, the seven sons of the lady died one by one in the same year. The woman was sad and she told the other ladies about all that happened in the forest. The older ladies in the village consoled and advised her to pray to Ahoi Ashtami Bhagawati by drawing the face of a cub and offering prayers to it. She did this continuously for seven years and by the grace of God, she got back all her seven sons.

Thus it has become customary for women to pray to Ahoi Ashtami Bhagawati every year and observe fast for the well-being of their children.