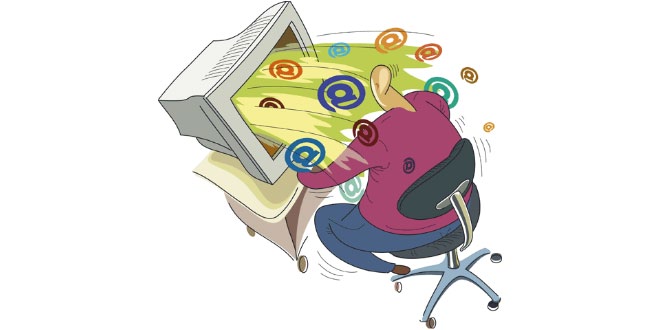 Excessive email use may lead to increased stress levels as well as health conditions such as hypertension and heart failure, a UK scientist has warned.

Professor Tom Jackson from Loughborough University has done extensive research on the impact of work email on health and mental wellbeing.

He has found a direct link between email use and increased levels of stress as well as other health conditions such as hypertension, thyroid disease, heart failure and coronary artery disease.

“Multifunctional devices like Blackberry’s and iPhones allow workers to be accessible 24 hours a day, and because of this it is likely that there will be an increase in stress levels,” said Jackson, from the University’s school of Business and Economics.

“Another concerning aspect is that many employees do not realise that they are stressed, as in my study users perceived themselves not to be stressed when the physiological findings showed their bodies were under increased stress.

“This would indicate that employees might find it difficult to self-regulate their use of communication media to ensure they do not become overwhelmed by stress,” he said.

“The significance of this is that long term short sharp increases such as this can lead to long term chronic health conditions,” he added.

Jackson, however, added that email is not a bad communication tool, but poor email training and management is the problem.

In a previous study he calculated that poor email use was costing employers up to £10,000 per employee per year in lost productivity.

“By reducing the volume of irrelevant and untargeted email and by reducing the frequency with which an email application checks for new email, the cost of email use can be optimised,” Jackson said.

Share
Previous The Sacrifice
Next The Weasel By The River Bank