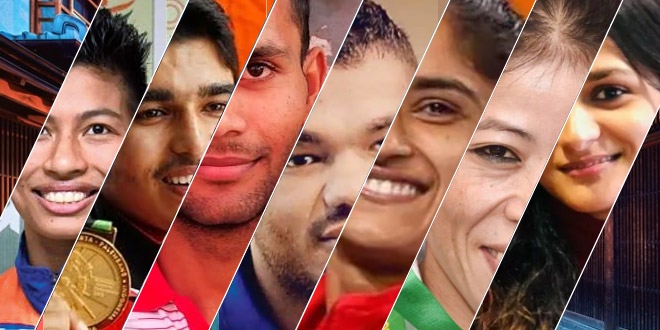 #OlympicsKiAsha: Here are 7 Indian athletes to watch out for in the upcoming Tokyo Olympics 2021

Several Indian politicians, most notably Union Minister Kiren Rijiju, are encouraging the sportsperson by sharing their inspiring stories on the social media platform with the hashtag #OlympicsKiAsha.

With just over a month left for the much anticipated Olympics 2020, which got postponed by a year because of the COVID-19 outbreak, Indian athletes are slogging hard to leave their mark in the upcoming sports competition. A campaign #OlympicsKiAsha is being run on social media platforms, especially on Twitter, to highlight the players participating in the Olympics and provide a window into the preparations undertaken by them.

Several Indian politicians, most notably Union Minister Kiren Rijiju, are encouraging the sportsperson by sharing their inspiring stories on the social media platform with the hashtag #OlympicsKiAsha. Even official Twitter accounts of All India Radio and other government departments are sharing stories of Indian athletes and how they are preparing for the forthcoming Olympics that is slated to take place between 23 July 2021 to 8 August 2021 in Japan.

Here are some of the Indian athletes to watch out for at the world’s largest sporting event:

Watch, as two times World Boxing Championships medalist and the 1st woman from Assam to qualify for the Olympics, @LovlinaBorgohai talks about her preparation for #Tokyo2020 and how she aims to fulfil her #OlympicsKiAasha pic.twitter.com/7fGUPz49SJ

Race walking is a sport that India has not enjoyed much success at the Olympics. In fact, India has hardly been consistent in competing in the sport in the Olympics until recently. Race walker Priyanka Goswami is putting in all the hard work to better herself for the upcoming Olympics. She aims to create history by being the first Indian woman to win a Gold medal in race walking event.

Medal hopeful from Uttar Pradesh @Priyanka_Goswam is determined and training hard to improve her timings. She is confident that the entire Indian team will give its best at #Tokyo2020. @sonysportsindia @KirenRijiju @RijijuOffice pic.twitter.com/kW9XuLPRb2

Goswami had qualified for Olympics by breaking the national record during the National Open Race Walking Championships in Ranchi in February. She had clocked 1 hour 28 minutes and 45 seconds, bettering the earlier national record of 1:29:54 in the name of another Tokyo-bound Bhawana Jat. The qualifying standard in women’s 20km race walk for the Tokyo Olympics is 1:31:00.

Professional shooter Saurabh Chaudhary is another athlete that India will be hoping to win the country a gold medal in the shooting event. He is currently training under his coach Amit Sheraon, who has a trick or two up his sleeves to teach his students how to maintain a balanced posture to consistently hit the bull’s eye.

Watch Asian Games and Youth Olympics Gold medalist #SaurabhChaudhary talk about his preparation for #Tokyo2020
and how he aims to have a winning Olympic debut to fulfil his #OlympicsKiAasha pic.twitter.com/Lz2CdmUCCy

Chaudhary has already won a gold medal at the 2018 Asian Games in 10 m Air Pistol. He was the youngest Indian gold medalist at the Asian Games. Earlier, he had won gold medals and set a new junior world record in the ISSF Junior World Cup in Suhl, Germany. He is also the only Indian shooter to have won a gold medal in ISSF World Championship, ISSF World Cup, Youth Olympic Games, Asian Games and Asian Air Gun Championship. At the 2018 World Championship in Changwon, Korea, he broke his own world record with a score of 245.5 and claimed gold in Junior Men 10m Air Pistol.

Another hope of India to bag a gold at the Tokyo Olympics is race walker Rahul Rohilla. Hailing from Bahadurgarh, Haryana, Rohilla had received the Olympics quota by winning the 20 KM men’s race in 1 hour 20 minutes 26 seconds during the National Open Race Walking Competition held in Ranchi in February this year.

Vikas competed at the Worlds and Asian Championships under the AIBA flag in 2015 due to the ban on the Boxing Federation of India. Vikas Krishan Yadav is the second Indian boxer after Olympian Vijender Singh to qualify Olympics for the third time. Boxing being one of the strong suit for Indians to win the Olympics medal, the country has high hopes from Yadav to bag the coveted gold in his event at the Tokyo Olympics.

Another Indian athlete who will be a cynosure at the Tokyo Olympics is wrestler Vinesh Phogat. She became the first Indian woman wrestler to win Gold in both Commonwealth and Asian games. Phogat has become the First Indian Athlete to be Nominated for Laureus World Sports Awards to be held on February 18, 2019.

Notably, Phogat is in her prime this year. She has already won three titles. Recently, she defeated Ukraine’s Bereza 8-0 in the final and won gold at Poland Open. The 26-year-old wrestler had already claimed gold medals at the Matteo Pellicone event (March) and Asian Championship (April) earlier.

Although Tokyo-bound legendary boxer Mary Kom lost the 51kg women’s boxing final at the Asian Championships to 2-time world champion Nazym Kyzaibay of Kazakhstan last month, she would be eyeing the upcoming Tokyo Olympics to make up for that defeat. She is the only woman boxer to have won a medal in each one of the first seven World Championships, and the only boxer (male or female) to win eight World Championship medals.

She is also the only boxer to become Asian Amateur Boxing Champion for a record six times. The Indian pugilist would be one of India’s biggest medal hopes at the Tokyo Olympics.

While the athletes are working hard to prepare for the upcoming Tokyo Olympics, there is still a cloud of uncertainty whether the mega sporting event will continue as planned or the Chinese Virus COVID-19 will throw a spanner in the works like it did the last year. The Olympics authorities are treading with caution, especially after the renewed bouts of the COVID-19 outbreak in different parts of the world that demonstrated the resilience of the pandemic. Though the Olympics authorities have said COVID appropriate behaviour will be followed at the event but they are acutely aware of the eventuality of the games being delayed further if the Chinese Virus COVID-19 outbreak rears its ugly head yet again.