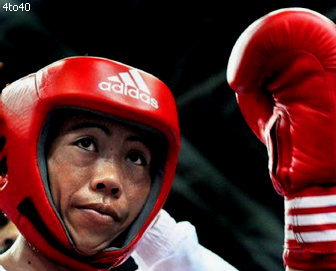 MC Mary Kom (Mangte Chungneijang Mary Kom) was born on 1st March 1983 and was brought up in a poor family. It is impossible to imagine that Mary Kom would one day rise and become a World Boxing Champion.

Her family background speaks a lot of how Mary overcame hardship and inconveniences and created a name for herself in the arena of world boxing. Her parents Mr. Mangte Tonpa Kom and Mrs Mangte Akham Kom earned their livelihood by working and being engaged in others jhum fields. Being the eldest, Mary helped her parents work in the fields, cutting woods, making charcoal and fishing. On the other hand, she spent a good time looking after her two younger sisters and a brother.

Mary Kom was interested in sports since her childhood. She took a keen interest in Athletics when she was in class VI in Loktak Christian Mission School, Moirang and class VII- VIII in St.Xavier School, Moirang. Mary thought that she would become a good athlete one day and carve a name for herself in the discipline.

But fate decided otherwise. After completing her class VIII, Mary came to Imphal and continued her studies at Adimjati School. Being so fond of sports, she enquired around and found out about women boxing.

It was a new idea since women boxers were relatively unknown those days. The rise of Dingko Singh and the demonstration of women boxers at the 5th National Games (Manipur) inspired her.

Mary Kom decided to hang up her books and enter into the ring with determination and strong will. To pursue her dream of becoming a world class pugilist, she joined Sports Authority of India, Khuman Lampak and underwent an intensive training from coach and mentor, Shri. Ibomcha Singh.

Seeing Mary’s potential and determination, Manipur State coaches Shri. Narjit Singh and Shri. Kishan Singh decided to take her under their wings. Mary was taught finer details and absorbed it all. The encouragement and support by Shri. Khoibi Salam, Secretary of MABA and Vice President of IABA, and Manipur Boxing Association was also a turning point for Mary Kom.

Sports are not everything for Mary. In her spare time, she takes pain to attend functions and mingle with the people. The ever-smiling and ready-to-help Mary Kom always encourages young people to chase their dreams and have faith in God.

Mary married K.Onler Kom of Samulamlan Block whom she met in Delhi. Onler proved to be a guide, a friend and a philosopher for Mary and they decided to vow each other for lifetime at Manipur Baptist Convention Church on 12th March 2005.

Mary’s humble beginning from Kangathei and her fame through continents of the world is a mere fairy tale. However, it was Mary’s grit determination and Never-Say-Die attitude with which she was able to earn laurels far away from her village. Mary Kom’s belief in God and herself was what made all the difference.

Today, the farmer’s daughter stands as a shining example of “Mission (almost) Accomplished”. Her most awaited Gold-medal will be at the London 2012 Olympics.