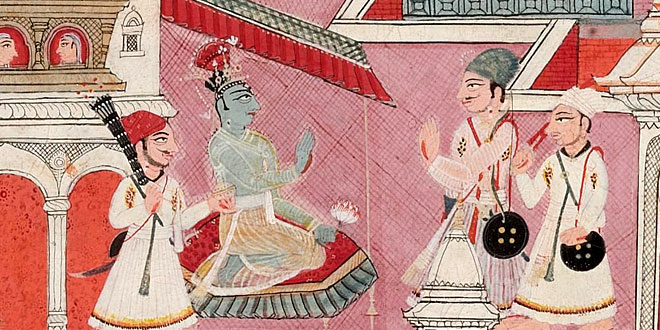 Prasenan fought the lion single-handed. In fight Prasenan was killed.

The lion was attracted by the brightness of ‘Syamantakam’ and carried away the gem.

A huge monkey, passing that way, saw the lion. The monkey was attracted by the glow of ‘Syamantakam’.

The monkey, who was very strong, chased the lion. The lion was killed in the fight with the monkey.

The monkey took ‘Syamantakam’, went to his home in a huge cave, and gave the gem to his children to play with.

Satrajit waited for his brother’s return from the hunt. The people who had gone on the hunt with Prasenan had all come back. They were unable to tell Satrajit what had happened to Prasenan-how and where he had disappeared.

Satrajit hoped that Prasenan would soon return. He waited for many days. But there was no news of Prasenan.

Satrajit was sad. He began to suspect lord Krishna. He remembered that Krishna had wanted ‘Syamantakam’ and that he had not given it to him. Was it possible that Krishna had killed Prasenan and stolen the precious stone?

Satrajit thought hard. His suspicion of Krishna grew strong. But he was helpless. Krishna was the King. Satrajit could not accuse him of murder or robbery.

Satrajit, however, could not keep his thoughts to himself. He told some of his very close friends what he thought of the disappearance of Prasenan and ‘Syamantakam’. He asked these friends to keep it a secret.

But each of these friends of Satrajit had his own very close friends. Each of them told a few people what Satrajit had said? They said Krishna had killed Prasenan and grabbed ‘Syamantakam’.

These friends told their friends and the story spread far and wide.

In a few days, everybody in the country was talking about Prasenan and ‘Syamantakam’- and Krishna’s cruel hand in his or her disappearance.

Women could talk of nothing else. They wanted their children to be careful.

“Take good care of your ornaments,” they told the children. “Krishna may steal them, if he gets a chance.”

The children were frightened. They began to run away from Krishna – though they had always loved him.

One day, Krishna saw some children playing at the roadside. They ran away when they saw him. But Krishna heard what they were saying as they ran away.

One child cried: “Run, run! Run away from Krishna. He is a thief. He will even kill Children, to grab their ornaments. That is what my mother said.”

The other children said that was what their mothers had told them, too.

Krishna was shocked. He wanted to know the cause of such ugly rumors against him.

Krishna went about in disguise. He moved among the people. The people did not know who he was. He heard the ugly rumors about him that had spread all over the country. Everybody seemed to believe that Krishna had killed Prasenan and grabbed ‘Syamantakam’.

Krishna and his companions went to the jungle where Prasenan had gone for the hunt. After a long search, they found the dead body of Prasenan. But they could not find the precious ‘Syamantakam’.

They continued the search. Soon, they discovered the body of a dead lion. They also noticed some footprints leading from the lion.

Krishna and his party trailed these footprints to the mouth of an enormous cave. The footprints led into the cave.

Krishna asked his companions to wait while he went inside.