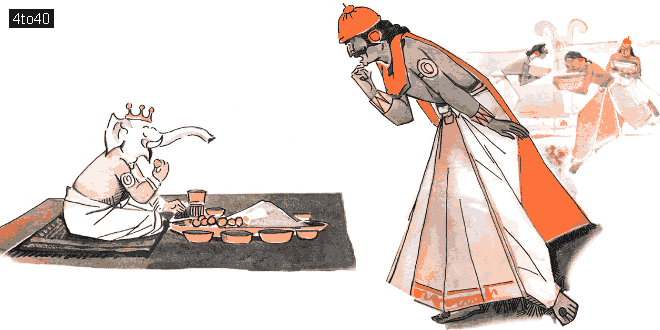 Ganapathi was the son of Lord Shiva. He was a short, fat boy with an elephant’s head. He was full of fun and frolic, and one day he broke one of his tusks while playing. He gave trouble if people took no notice of him. He stopped them from doing their work. He liked good food and wanted plenty to eat. Everyone tried to please him by offering him fruits, sweets and other nice things to eat.

He liked them to come begging for his help. Kings, nobles and all-important people went to him at one time or another seeking his help and he always helped those who went to him.

Kubera liked to spend his wealth in every possible way. He built big temples and huge palaces. He held festivals. He arranged feasts. He gave rich gifts to rajas and noblemen. He gave help to the poor. But, with all his spending, his wealth only increased, and he had to find new ways of spending it. He thought long about this and decided to invite the gods themselves to big feasts. Lord Shiva was his favorite god. It was owing to Shiva’s blessings that he had become so rich. So Kubera wanted to invite Shiva and his family to a feast.

Kubera went to Kailash, offered his prayers to Shiva and said, “O Lord, I am grateful to you for all your blessings. I am now the richest man in the world. I have helped the rich and the poor alike. Now everybody sings my praises.”

“Well, well,” said Shiva. “I have heard all this, but what brings you here now?”

“My Lord,” said Kubera, “I have come here to invite you and your family and friends to feast at my house. I shall call all the important people in the world. They all want to meet you to pay their respects to you.”

Shiva again smiled and said: “I don’t think my wife would like to go out without me, and the children will not go without their mother.”

Kubera was very disappointed. He fell at Shiva’s feet and said: “My Lord, what will people think of me now? I told them that I was coming here to invite you. They all think that you never refuse anything I ask you.”

Shiva said: “I think I can help you in one way. I shall ask my Ganapathi, my little son, to attend a feast in your home.”

Kubera agreed. He fixed a date for a feast for Ganapathi and returned home.

Kubera made arrangements to hold the biggest feast ever held in the world. A huge dining hall was built and new kitchens were set up. Silver vessels and gold plates and dishes were specially made. Foodstuffs of all kind were stored. He engaged hundreds of cooks and other servants.

Kubera invited many kings and their families, the nobles and their friends, and all the other important people of the world.

As the day of the feast approached, guests began to arrive. Kings, queens, princes, and princesses came wearing colorful costumes and costly jewels. Kubera received them and put them up in splendid guesthouses. On the day of the feast, he and his family wore the finest clothes and richest ornaments. They waited with the guests for the arrival of Ganapathi.

Ganapathi arrived at the appointed time. Kubera received him with respect and courtesy. He was going to introduce him at once to other guests, but Ganapathi said that he was very hungry and wanted his food first.

Kubera took Ganapathi to the dining hall, which was beautifully decorated. There were thousands of brightly lit lamps, and a sweet scent arose from sprinkle perfume and burnt incense; music was played. In the center of the hall was spread a beautiful and very costly carpet. In front of it were gold plates, and dishes filled with delicious food and fruits of many kinds.

Ganapathi sat down and started eating. He was very hungry and quickly ate up all the food that had been served. The plates were refilled and Ganapathi did not take long to empty them again. Once more all the plates and dishes were filled, but Ganapathi gobbled up all the food. More and yet more food was brought and it was eaten as soon as it was served.

Kubera ordered quicker service and people started running between the kitchen and the dinning hall, bringing in more and more food and quickly removed the empty plates. Ganapathi was still so hungry that those who served could not keep pace with his eating. Soon he had eaten all the food prepared for thousands of people, and he was still asking for more.

Kubera ordered more food to be cooked. But Ganapathi stood up and said that he was so hungry he could not wait. Kubera prayed for time but Ganapathi was impatient. He went to the kitchen and ate all the food as it was being cooked. He went to the storeroom and ate all the foodstuffs kept there. Still he was hungry. He came out and asked Kubera to give his something more to eat. Kubera was helpless.

Ganapathi went to Kubera’s palace and ate up whatever food he could find there. He went to the rooms where Kubera kept his gold and ate that up. Still he was not satisfied. He turned to Kubera and said, “You wanted me to eat here. Give me some food or I shall have to eat you”. Kubera took fright and started running. Ganapathi ran after him. Kubera ran faster and Ganapathi was just behind. They ran and ran for a long time until they reached Kailash. Kubera cried aloud to Shiva to come and save him. Shiva came out and Kubera fell at his feet.

“What is all this”? asked Shiva.

Ganapathi said, “Kubera did not give me enough to eat and I am still hungry”.

“You go in and asked your mother to give you something,” said Shiva, and Ganapathi left.

Shiva looked kindly at Kubera. Kubera prayed to Shiva and begged to be forgiven for being too proud of his riches.