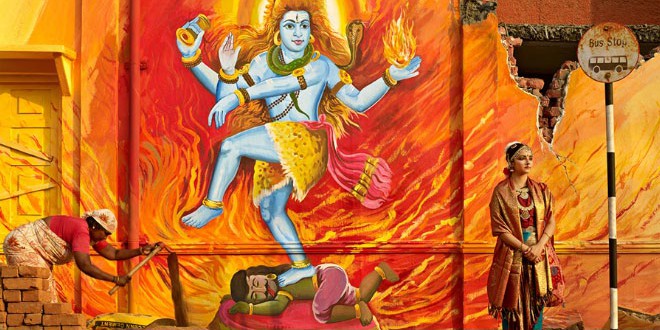 Shiva the ‘great yogi’ and cosmic dancer is everywhere: in art, in dance, even on key-chains and pendants. One can see him there with matted, braided locks, whirling with a drum in his hand

Shivaratri: Great Night of Shiva – The celebrations connected with Shivaratri, the Great Night of Shiva – Mahadeva as he is; at the same time Bhutnatha — span the folk and the philosophical worlds with remarkable ease. Grandmother’s tales speak of Shiva un-fastening and emptying out his ‘guthli’ on this night. With a flick of his hand, he releases all kinds of creatures – reptiles and insects who had sought refuge in his ‘guthli’ in the winter months – letting them go. He is the Great Yogi simply dusting off creatures from the confines of his robes.

This mental image brings to mind that other great image of Shiva as Nataraja, the Lord of Cosmic Dance, for there too he is seen as making things move in an eternal cycle. That image, its great beauty apart, may not be easy to comprehend at sight, but texts speak of it with passion, and great stories provide its context. We read about the obstacles Shiva had to face from sages following a different system of philosophy: Mimansa. They created from the sacrificial fire a tiger which was thrown at Shiva who smilingly seized it and with the nail of his little finger stripped it of its skin and wrapped it around himself. A noxious serpent was thrown at Shiva, who seized it and wrapped it around his neck like a garland. The last thing hurled at Shiva was the malignant dwarf Muyalaka, whose back Shiva broke and crushed under his foot before he began to dance.

This image of Shiva as the Great Dancer is everywhere: in art, in dance, even on key-chains and pendants. One can see him there with matted, braided locks, whirling with a drum in his hand: the “Great Yogi” who encompasses all creation within his robes and who, when the time comes, sets it all free with one magnificent action. In the classical images of Shiva as Nataraja, we see him two legged, four armed and bound on all sides by a circle of flames, the Tiruvasi, which symbolizes the circle of illusion. This circle is broken only at two points: at the left foot which is raised up gracefully not touching anything, and the lower left hand which points towards this lifted foot as if showing the path to salvation. In the image are summed up, with great brevity and brilliance, the very essence of Shaivite philosophy. The allusion is to the Pancakritya or the five activities of Lord Shiva: srishti (creation) signified by the damaru-drum held in the upper right hand; sthiti (preservation) by the lower right hand held in the gesture of abhaya; samhara (destruction) hinted at by the fire held in the upper left hand; tirobhava, the circle of flames, signifying the veil of illusion,; and anugraha (grace or salvation) hinted at by the raised left foot and the lower left hand which points towards it.

This dance of Nataraja – the Nadanta – is said to have been performed in the golden hall of Chidambaram before an assembly of gods, but, soaringly, the texts speak of it as danced within the immanent space of the devotee’s heart. When the question is asked, as in the great text, Tiruvacagam – “The Lord of Tillai’s court a mystic dance performs: what’s that my dear?” – the answer is also there: “In the night of Brahma, Nature is inert, and cannot dance till Siva wills it. He rises from his rapture, and dancing sends through inert matter pulsing waves of awakening sound …”