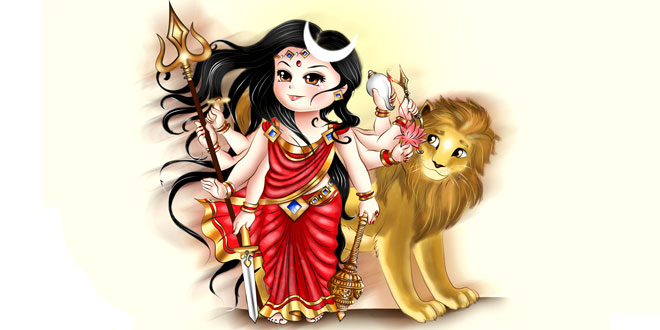 Navratri Poems For Students And Children: Navratri is a nine-day grand celebration in India. During these days, devotees observe fasts and worship Goddess Durga. On this occasion several kinds’ of Jagraate, community poojas, community feasts and celebrations are organized in various parts of the country. In Hindus, this festival is given immense importance and treated as a festival of the worship of several forms of Shakti. Nine different kinds of Durga forms are worshiped throughout the nine days celebration. Navratri is celebrated twice a year-once in Chaitra and the other in Ashwin. Several poets have expressed the eternal enlightenment and festive mood of the Navratra in their poem. Explore the two poems given below to understand more.

The temple priest has rung his bell.
A cloud of smoke from candles and lamps
Haloes the Goddess, glowing bright
This beat of drums both maddens and dulls.

To Mother, we know, we bow and pray
Her form not just this image of clay.

Nine nights for goddess Durga
Full of dance and songs
People worship her image
With flowers and prayers long.

May the Goddess bless us
With precious gifts to mankind
People praise her image
Full of beauty divine!

Previous What is significance of Vasant Navratri?
Next Navratri Customs: Navratri Culture & Traditions

The Fool: Buddha’s Poetry – Siddhartha, who later became known as the Buddha – or …