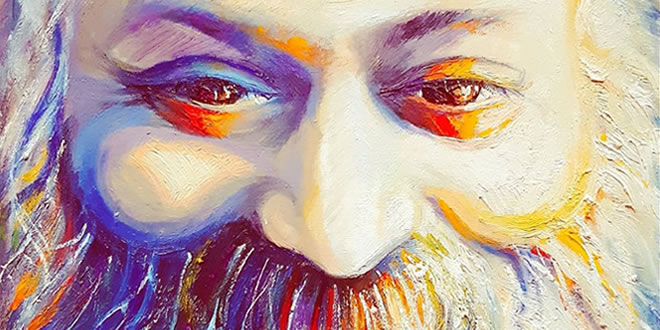 Osho, also known as the Zen Master, was born as Rajneesh Chandra Mohan Jain on 11th December 1931, in Narsinghpur District of Madhya Pradesh. Even though he was born to parents of Jain religion, he never adhered to any particular religious faith in his lifetime. Throughout hid childhood, Osho came across as a highly intellectual, but rebellious student. One of the major influences in his life were his grandfather and grandmother, with whom he spent the first seven years of his life.

As per Osho, he received enlightenment in the year 1953, at the age of 21. Thereafter, he finished his graduation and post graduation in Philosophy from D. N. Jain College, Saugar University. For a few years, he taught philosophy, first at Raipur Sanskrit College, and then, at Jabalpur University. During that time, he traveled throughout the country, giving lectures on socialism and Gandhi. The first meditation camp was organized by Osho in 1964. In 1966, he quit his job as a professor and then onwards, started his journey as one of the greatest spiritual leaders of India.

The followers and disciples of Osho established a foundation in his name, in the year 1969. The headquarters of the foundation was set up on the ground floor of a building in Mumbai. Later, due to space constraints and the bad weather of Mumbai, the headquarters were shifted to the Koregaon Park, Pune. The ashram is today known as Osho International Meditation Resort.

After giving discourses on a daily basis for a period of almost 15 years, Osho went into a three-and-a-half-year period of public silence in the year 1981. During that period, his discourses were replaced by satsangs (silent sitting, with some readings from his works and music). The public silence came to an end in 1984 and he resumed his daily discourses once again.

In 1985-86, Osho went on a world tour to spread the understanding of spirituality. After being refused by a number of countries, he came back to India in 1986. From 1987, he again started giving discourses at his ashram in Pune. Osho forfeited the name of ‘Bhagwan Rajneesh’ in the year 1989 and took the name of Osho. Osho breathed his last in 1990, at the age of 58.

Osho is also known as the Zen (concentration) Master as he managed to attain a very high level of meditative trance.

As per Osho, there is nothing more valuable or precious in this world than love, meditation and laughter. Enlightenment the normal state in which a human being lives. It is because of being bounded in the emotional ties that he fails to recognize this state. Meditation is not something that needs to be taught, it is the state of just being.

Osho Dham at Pune is known as Osho International Meditation Resort. People from various parts of the country as well as the world come to this ashram or dham to learn meditation or even just relax and rejuvenate.