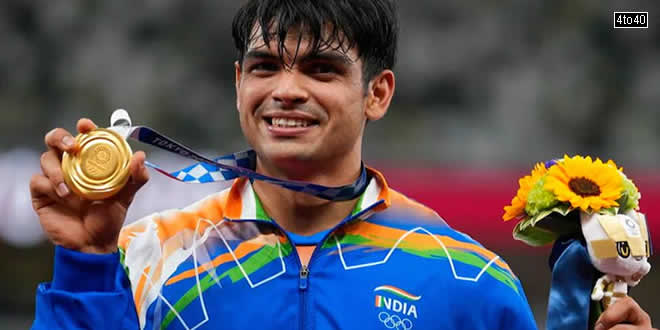 Neeraj Chopra had topped the qualifying round with a 86.59 meter throw, which he registered in his first attempt.

Neeraj Chopra wins Gold: Neeraj Chopra has created history by winning the first athletic medal for India in a century. Neeraj Chopra has won the Gold Medal at the Tokyo Olympics in the Javelin Throw event on Saturday. In doing so, he ended India’s century long wait for an Olympic medal in athletics.

The last Indian medal in athletics came in 1920. Neeraj Chopra had topped the qualifying round with a 86.59 meter throw, which he registered in his first attempt. On Saturday’s finals, Chopra scored a whopping 87.03 meter in the first throw and 87.58 meter in the second. His other throws could not match his feat in the first two rounds but they did not need to. His second throw was enough to won him the Olympic Gold.

Johannes Vetter from Germany, the overwhelming favourite to win, could not manage to qualify for the final eight.

With Chopra’s medal, India has registered its highest medal tally in the Olympics ever. Mirabai Chanu had opened India’s account at the Tokyo Olympics with a silver medal in Boxing. PV Sindhu followed it up with a bronze in Badminton.

Ravi Dahiya won a silver medal in Wrestling. Lovlina Borgohain won a bronze in boxing, Bajrang Punia the same in Wrestling. And, of course, the Indian Hockey Team won a medal in Olympics after 41 years with a Bronze finish.