Uses: The roots and fruits are sweet, coling, emollient, appetizer, alternate, laxative, cardiotonic, styptic, lithontriptic and tonic. They are useful in strangury, dysuria, vitiated conditions of vat and pitta, renal and vesical calculi, anorexia, dyspepsia, helminthiasis, cough, asthama. The seeds are astringent, strengthening and are useful in epistaxis, hemorrhages and ulcerative stomatitis. The ash of the whole plant is good for external application in rheumarthritis. 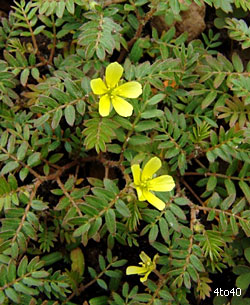 Tribulus terrestris is a flowering plant in the family Zygophyllaceae, native to warm temperate and tropical regions of the Old World in southern Europe, southern Asia, throughout Africa, and in northern Australia. It can thrive even in desert climates and poor soil.

It is a taprooted herbaceous perennial plant that grows as a summer annual in colder climates. The stems radiate from the crown to a diameter of about 10 cm to over 1 m, often branching. They are usually prostrate, forming flat patches, though they may grow more upwards in shade or among taller plants. The leaves are pinnately compound with leaflets less than a quarter-inch long. The flowers are 4–10 mm wide, with five lemon-yellow petals. A week after each flower blooms, it is followed by a fruit that easily falls apart into four or five single-seeded nutlets. The nutlets or “seeds” are hard and bear two to three sharp spines, 10 mm long and 4–6 mm broad point-to-point. These nutlets strikingly resemble goats’ or bulls’ heads; the “horns” are sharp enough to puncture bicycle tires and to cause painful injury to bare feet.

The plant is widely naturalised in the Americas and also in Australia south of its native range. In some states in the United States, it is considered a noxious weed and an invasive species.

It has been reported that puncture vine seeds have been used in homicidal weapons in southern Africa; murderers smear them with the poisonous juice of Acokanthera venenata and put them where victims are likely to step.