Habitat: Throughout the valleys in Himalayan region at altitude of 3200m -5200 m. 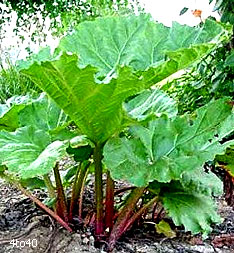 Rhubarb is a group of plants that belong to the genus Rheum in the family Polygonaceae. They are herbaceous perennial plants growing from short, thick rhizomes. They have large leaves that are somewhat triangular shaped with long fleshy petioles. They have small flowers grouped in large compound leafy greenish-white to rose-red inflorescence. While the leaves are toxic, the plants have medicinal uses, but most commonly the plant’s stalks are cooked and used in pies and other foods for their tart flavour. A number of varieties have been domesticated for human consumption, most of which are recognised as Rheum x hybridum by the Royal Horticultural Society.

Rhubarb is now grown in many areas and thanks to greenhouse production is available throughout much of the year. Rhubarb grown in hothouses (heated greenhouses) is called hothouse rhubarb. This rhubarb is typically made available at consumer markets in February and March, before outdoor cultivated rhubarb is available. The hothouse rhubarb is usually a brighter red than the cultivated rhubarb. Hothouse rhubarb is also more tender and tastes sweeter than cultivated rhubarb. In temperate climates rhubarb is one of the first food plants to be ready for harvest, usually in mid to late spring (April/May in the Northern Hemisphere, October/November in the Southern Hemisphere), and the season for field-grown plants lasts until September. In the northwestern US states of Oregon and Washington, there are typically two harvests: one from late April to May and another from late June and into July. Rhubarb is ready to be consumed as soon as it is harvested, and freshly cut stalks will be firm and glossy.

Rhubarb can be used as a strong laxative, with the roots being used as a laxative for at least 5,000 years. Rhubarb has an astringent effect on the mucous membranes of the mouth and the nasal cavity.

The roots and stems are rich in anthraquinones, such as emodin and rhein. These substances are cathartic and laxative, which explains the sporadic use of rhubarb as a slimming agent.