Habitat: Found Through out India. 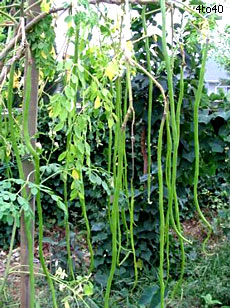 Moringa oleifera, commonly referred to simply as “Moringa” is the most widely cultivated species of the genus Moringa, which is the only genus in the family Moringaceae. It is an exceptionally nutritious vegetable tree with a variety of potential uses. The tree itself is rather slender, with drooping branches that grow to approximately 10 m in height. In cultivation, it is often cut back annually to 1 meter or less and allowed to regrow so that pods and leaves remain within arm’s reach.

The “Moringa” tree is grown mainly in semi-arid, tropical, and subtropical areas, corresponding in the United States to USDA hardiness zones 9 and 10. While it grows best in dry sandy soil, it tolerates poor soil, including coastal areas. It is a fast-growing, drought-resistant tree that is native to the southern foothills of the Himalayas in northwestern India. Reports that it grows wild in the Middle East or Africa are completely unsubstantiated. Today it is widely cultivated in Africa, Central and South America, Sri Lanka, India, Mexico, Malaysia, and the Philippines. It is considered one of the world’s most useful trees, as almost every part of the Moringa tree can be used for food or has some other beneficial property. In the tropics, it is used as forage for livestock, and in many countries, Moringa is used as a micronutrient powder to treat diseases.

The immature green pods called “drumsticks” are probably the most valued and widely used part of the tree. They are commonly consumed in India and are generally prepared in a similar fashion to green beans and have a slight asparagus taste. The seeds are sometimes removed from more mature pods and eaten like peas or roasted like nuts. The flowers are edible when cooked, and are said to taste like mushrooms. The roots are shredded and used as a condiment in the same way as horseradish; however, it contains the alkaloid spirochin, a potentially fatal nerve-paralyzing agent, so such practices should be strongly discouraged.

The leaves are highly nutritious, being a significant source of beta-carotene, Vitamin C, protein, iron, and potassium. The leaves are cooked and used like spinach. In addition to being used fresh as a substitute for spinach, its leaves are commonly dried and crushed into a powder, and used in soups and sauces. Murungakai, as it is locally known in Tamil Nadu and Kerala, is used in Siddha medicine. Its leaves are full of medicinal properties. The tree is a good source for calcium and phosphorus. In Siddha medicines, these drumstick seeds are used as a sexual virility drug for treating erectile dysfunction in men and also in women for prolonging sexual activity.

The Moringa seeds yield 38–40% edible oil (called ben oil from the high concentration of behenic acid contained in the oil). The refined oil is clear, odorless, and resists rancidity at least as well as any other botanical oil. The seed cake remaining after oil extraction may be used as a fertilizer or as a flocculent to purify water.

In the Philippines, the plant is propagated by planting limb cuttings 1–2 m long, from June to August, preferably. The plant starts bearing pods 6–8 months after planting, but regular bearing commences after the second year. The tree bears for several years. It does not tolerate freeze or frost. It can also be propagated by seed. As with all plants, optimum cultivation depends on producing the right environment for the plant to thrive. Moringa is a sun- and heat-loving plant. Seeds are planted an inch below the surface and can be germinated year-round in well-draining soil.