Uses: Pulp from fruits called “Cessia pulp” is a well known Laxative. Bark of tree is rich in tannins. 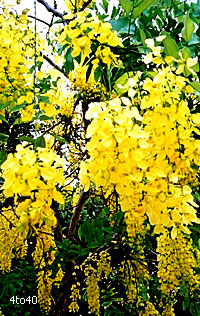 The Golden Shower Tree (Cassia fistula as described by Linne, and see below for other names) is a flowering plant in the family Fabaceae, native to southern Asia, from southern Pakistan east through India to Myanmar and south to Sri Lanka. It is the national tree of Thailand.

It is a medium-sized tree growing to 10-20 m tall with fast growth. The leaves are deciduous or semi-evergreen, 15-60 cm long, pinnate with 3-8 pairs of leaflets, each leaflet 7-21 cm long and 4-9 cm broad. The flowers are produced in pendulous racemes 20-40 cm long, each flower 4-7 cm diameter with five yellow petals of equal size and shape. The fruit is a legume is 30-60 cm long and 1.5-2.5 cm broad, with a pungent odour and containing several seeds. The seeds are poisonous.

Cassia fistula is widely grown as an ornamental plant in tropical and subtropical areas. It blooms in late spring (May on the northern, November on the southern hemisphere); flowering is profuse, with trees being covered with yellow flora, with almost no leaf being seen. It is not recommended for dry climates. Growth for this tree is best in full sun on well-drained soil; it is drought- and salt- tolerant, but will be damaged by even short spells of freezing weather. It can be subject to mildew, leaf spot and root diseases.

In Ayurvedic medicine, Golden Shower Tree is known as aragvadha (“disease killer”). Its fruitpulp is used as mild laxative, against fevers, arthritis, vatavyadhi (nervous system diseases), all kinds of rakta-pitta (bleeding, such as hematemesis or hemorrhages), as well as cardiac conditions and stomach problems such as acid reflux. The root is considered a very strong purgative, and self-medication or any use without medical supervision is strongly advised against in Ayurvedic texts.

Though its use in herbalism is attested to since millennia, there has been rather little research in modern times. While the purgative action is probably due to abundant 1,8-dihydroxyanthraquinone and derivates thereof, whether the reputed nervous system (anti-vatavyadhi) effects are real and if, what causes them, is not known. While many Fabaceae are a source of potent entheogens and other psychoactive compounds (see e.g. tryptamines), such plants are rarely found among the Caesalpinioideae.

The golden shower tree is the national flower of Thailand; its yellow leaves symbolize Thai royalty. A 2006-2007 flower festival, the Royal Flora Ratchaphruek, was named after the tree, which is most often called dok khuen or ratchaphruek in Thailand. The golden shower tree is the state flower of Kerala in India. The flowers are of ritual importance in the Vishu festival of Kerala state of India, and the tree was depicted on a 20 Indian rupees stamp. C. fistula is also featured on a 2003 joint Canadian-Thai design for a 48 cent stamp, part of a series featuring national emblems. It has strong & very durable wood. There is please called “Ahala Kanuwa” in “Adems peek” “Sri Lanka” and its made by Cassia fistula (Ahala) heart wood.