Uses: It is Diuretic, Cardiac, Nervine and Tonic. It is reported to improve intellect, treatment of asthma, hoarseness, insanity, epilepsy. It is a potent nervous tonic and is anti anxiety agent. It is considered good for heart. 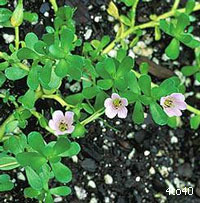 Bacopa monniera is bitter in taste; has been used in the Ayurvedic system of medicine for centuries. Brahmi which occurs naturally in India and has a long history of use in the Ayurvedic medicine tradition in the treatment of a number of disorders, particularly those involving anxiety, intellect and poor memory. Traditionally, it was used as a brain tonic to enhance memory development, learning, and concentration.

Bacopa monniera, is a small, creeping herb with numerous branches, succulent, rooting at the nodes, with numerous prostrate branches, each 10-30 cm long. Brahmi leaves are petiole, oblong, sessile, and fleshy. Flowers are purple in color; axillary, solitary with peduncles. In India and the tropics it grows naturally in wet soil, shallow water, and marshes. The herb can be found at elevations from sea level to altitudes of 4,400 feet, and is easily cultivated if adequate water is available. Flowers and fruit appear in summer and the entire plant is used medicinally.

Compounds responsible for the pharmacological effects of Bacopa include alkaloids, saponins, and sterols. Many alkaloids like Brahmine and herpestine, saponins d-mannitol and hersaponin, acid A, and monnierin–were isolated in India over 40 years ago. Other active constituents identified include betulic acid, stigmastarol, beta-sitosterol, as well as numerous bacosides and bacopasaponins. The constituents responsible for Bacopa’s cognitive effects are bacosides A and B.

Loss of cholinergic neuronal activity in the hippocampus is the primary feature of Alzheimer’s disease. Based on animal study results, bacosides appear to have antioxidant activity in the hippocampus, frontal cortex, and striatum. Animal research has shown Bacopa extracts modulate the expression of certain enzymes involved in generation and scavenging of reactive oxygen species in the brain.

Brahmi is a popular Ayurvedic herb. It is a herb with an ancient history and has been a revered household name in India for over 3000 years. According to Ayurvedic Text Brahmi is known as a most powerful brain food.