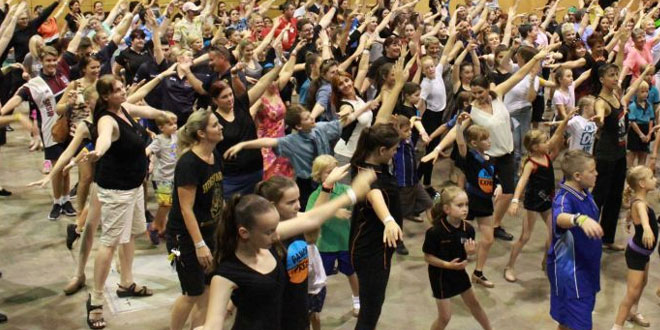 Photo: On World Tap Dance Day, May 25, Mackay set the world record for the largest tap dance lesson in a single venue. With stewards recording participants to meticulous standards, 274 tappers took part in the lesson.

The Guinness World Records world record for the Largest recycling lesson is 12,994 and was organized by Coimbatore City Municipal Corporation (India), in Coimbatore, Tamil Nadu, India, on 5 August 2015.

Guinness World Records also recognized the world record for the largest cycling awareness lesson; it is made up of 504 participants and was hosted by the Sha Tin Police District Junior Police Call (Hong Kong) with the participation and assistance of students, schools and community members from Sha Tin District at Sha Tin Racecourse in Hong Kong, China on 19 November 2016.

The idea started when a dance troupe touring from Melbourne realised it would ring in Tap Dance Day in a region that probably could use a pick-me-up, The ABC Tropical North reports.

Producer of A Fine Romance Margaret Fisk said the idea started as a tap dance workshop for seniors and evolved into a world record attempt.

Dancers Sage Douglas and Joe Meldrum instructed the class, the largest dance lesson of any kind either of them had ever taught.