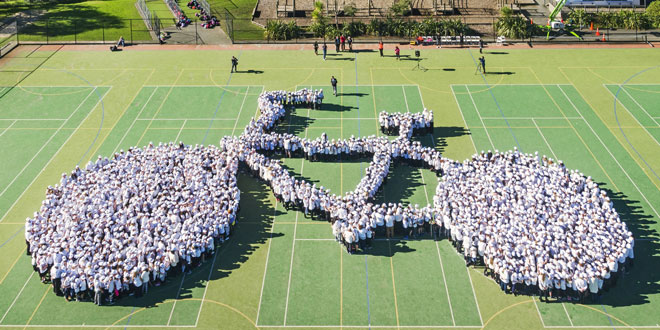 Largest human image of a bicycle

Photo: A group of 1799 school children, teachers and parents claimed the World Record title for the ‘largest human image of a bicycle’ at Glen Eden Intermediate on 9 June. The entry saw kids, parents and teachers create the shape of a bicycle and hold their position for five minutes on the school sports turf.

The Guinness World Records world record for the largest human image of a bicycle consists of 1,148 people and was achieved by Warwickshire County Council (UK) at Kenilworth School, in Kenilworth, UK

The previous Guinness world record was set just 10 days ago by 1148 students at Kenilworth School in the United Kingdom.

Participating students had to be wearing the same uniform. They were counted using a methodical, strict, process and once assembled form a clear image of a bike. Drone cameras were sent up in the air to capture the image.

Auckland Transport’s Manager for Walking, Cycling and Road Safety spokesperson Kathryn King said the record breaker is one step towards a sustainable transport future in the city.