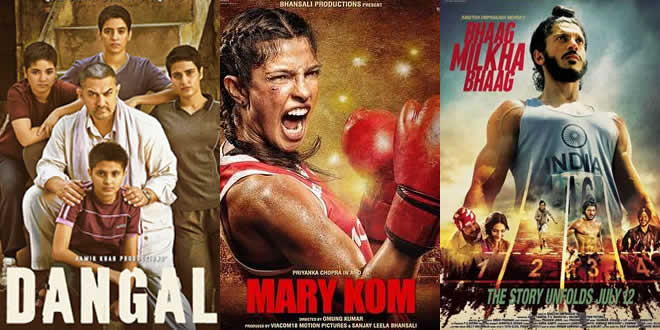 The past few years have seen quite a few sports biopics in Bollywood, and there are many more in the pipeline. While there is a huge audience that is drawn to such subjects, we spoke to filmmakers who told us that making sports biopics is no mean feat. They also spoke about the challenges that they face in putting such ambitious projects together, some which involve getting the right cast, investing in research and striking the right balance between realism and entertainment.

Dangal, Bhaag Milkha Bhaag (BMB), MS Dhoni: The Untold Story, Mary Kom, Azhar, Budhia Singh: Born to Run and Soorma are some of the sports biopics that have released over the last few years. While some of the films received critical recognition and commercial success in equal measures, others missed the mark.

Mahavir Singh Phogat, a former wrestler, decides to fulfill his dream of winning a gold medal for his country by training his daughters for the Commonwealth Games despite the existing social stigmas.

Indian biographical sports drama film on a script written by Prasoon Joshi. The story is based on the life of Milkha Singh, an Indian athlete who was a national champion runner and an Olympian.

It is based on the life of former Test, ODI and T20 captain of the Indian national cricket team, Mahendra Singh Dhoni.

Mary Kom depicts Kom’s journey of becoming a boxer to her victory at the 2008 World Boxing Championships in Ningbo. The film marks the Hindi playback singing debut of Chopra, who provided her vocals for a song named “Chaoro” (a lullaby).

Indian biographical sports drama film directed by Tony D’Souza. The story is written by Rajat Arora and is inspired from the life of Indian cricketer and former national team captain Mohammad Azharuddin.

Indian biographical sports film directed by Soumendra Padhi. It is based on the life of Budhia Singh, world’s youngest marathon runner, who ran 48 marathons, when he was only five years old.

Indian biographical film based on the true story of the athlete of the same name. A soldier in the Indian Army, he won a gold medal at the Indian National Games, but was forced to become a bandit.

Film based upon the National hockey team title at the 1948 summer Olympics.

The film on the ace badminton player will see Shraddha Kapoor play the title role. The Amol Gupte directed film will go on floors later this year.

Viacom18 Motion Pictures has announced a film on the life of the captain of the Indian Women’s Cricket team. The producers are yet to announce a cast or director.

Harshvardhan Kapoor is slated to play the lead role in a film on the life of the legendary shooter. To be directed by Kannan Iyer, the film will hit screens in 2019.

An untitled biopic on ace badminton player Pullela Gopichand has been announced by Fox Star Studios along with Vikram Malhotra’s Abundantia Entertainment. The producers are yet to finalize a director or cast for the film that will reportedly be made both in Hindi and Telugu.

Filmmaker Pooja Shetty has announced a film on the life of the great hockey player. Names ranging from Varun Dhawan to Shah Rukh Khan have been thrown up but none locked yet.

Actor Sonu Sood is producing a film on the young badminton player. While names like Deepika Padukone have been thrown up, a final decision on the cast has not been made yet.

Director Revathy S. Varmha will make a film on the legendary athlete in English to be dubbed in four other languages, Hindi, Malayalam, Chinese and Russian. While a final cast is yet to be announced, actor Priyanka Chopra seems to be the front runner for the title role.

Actor Sushant Singh Rajput has reportedly been signed on to play the differently abled sportsman who won the gold at the 1970 Commonwealth Games and the Paralympics in Germany in 1972. The film is to be directed by Prashant Singh.