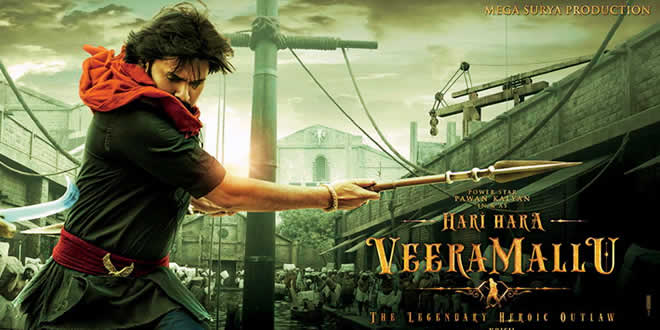 The story is set in 17th century under the backdrop of Mughal Empire. The film began its production in September 2020 and it is scheduled for release on 29 April 2022 in the Telugu, Tamil, Malayalam, and Hindi languages.

In September 2020, Krish Jagarlamudi, the director of the film announced that a period film tentatively titled PSPK 27 with Pawan Kalyan has been in production. It is the first collaboration between Jagarlamudi and Kalyan. The film is set in 17th century with the backdrop of Mughals and Qutb Shahis. In March 2021, the film’s title is announced as Hari Hara Veera Mallu.

The film is being produced by A M Rathnam under his production banner. The film’s score and soundtrack are composed by M. M. Keeravani. Gnana Shekar V. S. is signed as the cinematographer.

Ben Lock, who has supervised the graphic work in films like Aquaman, Warcraft, Star Wars: The Force Awakens is in charge of the VFX of this film.

In March 2021, Jacqueline Fernandez was signed to play a crucial role in the film. However, Fernandez opted out of the project due to scheduling conflicts and she was replaced by Nargis Fakhri in December 2021. Fakhri plays Mughal empress Roshanara.

Jagarlamudi completed a 15-day shooting schedule with Pawan Kalyan before it was halted due to the COVID-19 pandemic. The shooting is resumed in January 2021 in Hyderabad. Arjun Rampal joined the production in February 2021. The production has setup historical monuments Charminar, Red Fort and Machilipatnam port for the film.

Shooting of the film experienced delays due to Kalyan’s other film commitments, namely, Bheemla Nayak. In December 2021, art director Rajeevan was replaced by Anand Sai, who began working on the film’s sets. A new schedule is expected to begin in January 2022, where a major part of the film would be shot.

The film was initially slated for worldwide release in the Telugu, Tamil, Malayalam and Hindi languages on 14 January 2022 coinciding with Sankranti. However, in September 2021, the release date was rescheduled as 29 April 2022.