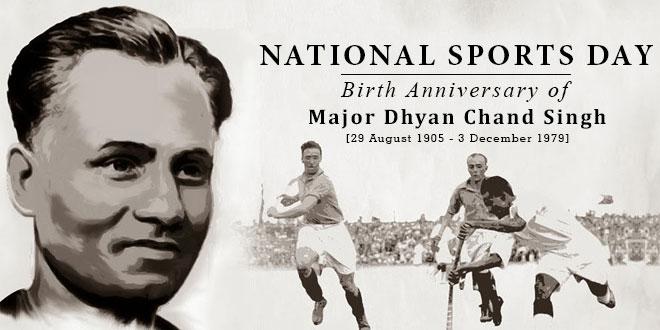 Dhyan Chand Singh was an Indian Hockey player, and considered to be the all time greatest player the game of Hockey has ever seen the world over. He has probably been the only Indian player ever in any sport which skills so high that generated a number of myths about his abilities as a Hockey player.

He was born on the 29th of August 1905 at Prayag (Allahabad), Uttar Pradesh to a Bais Rajput family. His father served the Indian Army as a Subedar, and played the game of Hockey. Initially known as Dhyan Singh, he had 2 brothers named Mool Singh and Roop Singh, the latter one too being an accomplished Hockey player. Dhyan could not resume his studies after 6th standard as his family used to move from one place to another, before finally settling down permanently at Jhansi.

In his younger days, Dhyan was not much interested into sports although he liked wrestling a lot. He started playing Hockey with his friends who used to themselves make Hockey sticks from tree branches and balls from ragged clothes. At the age of 14 years he visited a Hockey match with his father, where one team was down by 2 goals. He insisted his father to play from the losing side, and when an Army Officer let him do so, Dhyan scored 4 goals for the team. Impressed by his skills, the Officer offered him to join the army and at the age of 16 years Dhyan was inducted into the Punjab Regiment as a Sepoy in the year 1922. Subedar-Major Bhole Tiwari of Brahmin Regiment became Dhyan’s mentor inside the Army and taught him the basics of the game. Pankaj Gupta was the first Coach of Dhyan Singh who predicted that one day he would shine like the Moon, called Chand in Hindi. Hence, Dhyan Singh came to be known as Dhyan Chand after that.

There are many incidents that describe the grandeur of Dhyan Chand’s amazing skills as a wonderful Hockey player. In one of them, he scored 3 goals in the last 4 minutes of a match wherein his team was losing by 2 goals, and got his team the victory in the match. This was the Final match of the Punjab Infantry Tournament in Jhelum. After this match, Dhyan Chand was named the “Hockey Wizard”.

In the year 1926 Dhyan Chand was selected for the Indian Hockey team going to visit New Zealand at a tour. During the tour, the Indian team scored 20 goals in a match played at Dannkerke, and Dhyan Chand alone had scored 10 of them. India played 21 matches on the tour, out of which it won 18, lost 1 and drew 2 matches. The team scored a total number of 192 goals and Dhyan Chand alone had scored over 100 of them. After his return to India, he was promoted to the post of Lance Nayak in the Army. At the London Folkstone Festival in 1927, he scored 36 goals out of India’s total 72 goals, in 10 matches played at the event.

He played for the Indian Hockey team in the Amsterdam Olympic Games 1928, and scored 2 out of the 3 goals in the final match against Netherlands, getting India the Gold Medal by a 3-0 win. In the Los Angeles Olympics 1932, the Indian team led by Lal Shah Bukhari again won the Gold Medal. In the tournament, the Indian Hockey team defeated the USA Hockey team by 23-1, which remained a world record until it was broken in the year 2003. Out of these 23 goals, 8 were scored alone by Dhyan Chand. In the event, Dhyan Chand scored 12 goals for India in 2 matches.

In the Berlin Olympics 1932, Indian had successfully made their path to the finals crushing Hungary by 4-0, USA by 7-0 and Japan 9-0 without conceding a single goal in the tournament. The team defeated France in the Semi-Finals by 10 goals, and was going to combat Germany in the Finals. In the Final match, the Indian squad could score only 1 goal till the interval. Dhyan Chand removed his shoes in the interval and played the match barefooted onwards. The Indian team won the match and the Gold medal by 8-1.

Adolf Hitler, the German dictator supposedly offered Dhyan Chand a higher post in the German Army than the one he was holding in the Indian Army, but he politely denied the offer.

He kept playing till the age of 42 years, and retired from the game in the year 1948. Dhyan Chand met Don Bradman, the Cricket Maestro at Adelaide in the year 1935. After watching him play Hockey, Bradman commented “He scores goals like runs in Cricket.”

The last days of Dhyan Chand were not very happy, as he was short of money and was badly ignored by the nation. He developed liver cancer, and was sent to a general ward at the All India Institute of Medical Sciences (AIIMS), New Delhi. He died on the 3rd of December 1979.

For his extra-ordinary services to the nation, the Government of India celebrates Dhyan Chand’s birthday (29th of August) as National Sports Day. The Indian Postal Service issued a postage stamp in his memory, and the Dhyan Chand National Stadium at New Delhi has been named after him. He was honored by the Padma Bhushan award by the Government of India in the year 1956.