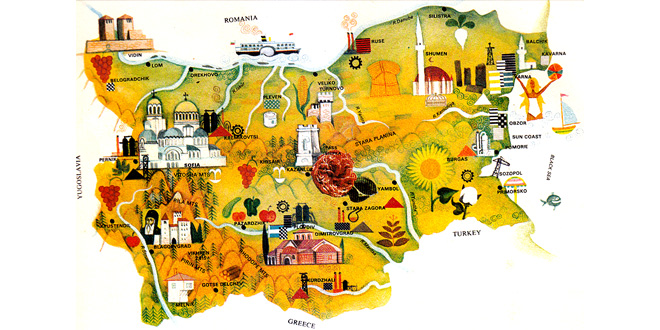 System of government: Socialist Republic
Capital: Sofia (Sofiya)
Location: In the north-western part of the Balkan Peninsula on the coast of the Black Sea; Bulgaria is bounded by Yugoslavia to the west, Greece and Turkey to the south, and Romania to the north
Area: 110,912 sq km
National composition: Bulgarians (91%), Turks, Macedonians, Romanians, Armenians, Gypsies
Religion: Eastern Orthodox
Official language: Bulgarian
Currency: Lev = 100 stotinki
Administrative divisions: Bulgaria has been divided into 28 provinces which correspond approximately to the 28 districts
Other major cities: Plovdiv, Varna, Ruse, Burgas
Highest elevation: Musala (2,925 m) in the Rila Massif
Chief rivers: Danube (Dunav), Tundza, Marista, Kamchiya
Climate: Continental in the north, Mediterranean in the east and south

Much of Bulgaria is mountainous. The Balkan Mountains (Stara Planina in Bulgarian), a continuation of the Carpathians, run from east to west, dividing the country in two. To the north lies the fertile Danube plain. The Danube itself, which is Bulgaria’s chief inland waterway, forms the northern boundary with Romania. South of the Balkan Mountains is a chain of basins, including the Sofia, Kazanluk and Sliven basins, with their thermal springs. Farther south is the fertile Thracian Plain which is drained by the Marista and Tundza rivers. Another upland area comprising the Rhodope (Rodopi), Rila and Pirin mountains are in the south-east.

The vegetation and the wildlife represent a transition between the Mediterranean and Central European types. About a third of the country is forested. Wolves and bears still live in remote mountain regions, and Bulgaria also has a rich birdlife.

Cultivated land covers more than half of the country and agriculture employed 37 per cent of the work-force in 1980. Crops include cereals, cotton, fruit, grapes (especially for wine-making), rice, sunflower seeds, sugar beet, tobacco and vegetables. Bulgaria is also famous for its attar of roses which is used in perfumes. Water buffaloes, sheep, pigs, cattle, poultry, donkeys and mules are reared. Forestry and pulp and paper production are also important.

In 1980 industry employed 39 per cent of the work-force. Bulgaria’s chief mineral resources are cadmium, coal, cobalt, iron ore, lead, rock salt, silver vanadium and zinc. Some oil and natural gas are also extracted. Engineering is the leading industrial sector. It is noted for machine tools, tractors and battery-driven forklift trucks. Food processing is a traditional industry. Tinned fruit and vegetables, as well as tobacco products, are also exported. Electronics, petrochemicals and the traditional manufacture of textiles are important and expanding industries.

Railways are the most important form of transport in the interior. Sofia is served by several European airlines. The bulk of Bulgaria’s trade is with fellow COMECON (Council for Mutual Economic Assistance) countries. Tourism is increasing and makes an important contribution to the national income.