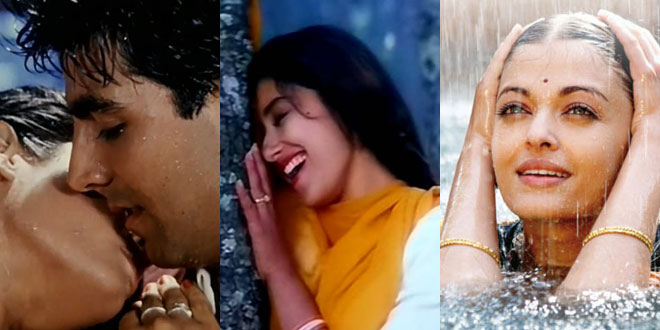 If American actor Gene Kelly had to do a Singin’ In The Rain in Bollywood, he’d probably have to forget tap-dancing around lamp posts and let yards of clingy chiffons take over. For Bollywood, cloudbursts mean steaming up the rains either in celebration or sheer sensuality. It does not matter whether you are a film buff or a music aficionado, with the rain song being an important prop in Hindi films, we all have a playlist of baarish numbers that we reach out to when it’s pouring. Right from the black-and-white days of Barsaat Ki Raat with Madhubala to the new-age romance of Baarish with Shraddha Kapoor. We take a behind-the-scenes look at some of the most popular rain songs…

Who can forget Raveena Tandon cavorting sexily in a yellow sari around Akshay Kumar? Ironically, Tip Tip Barsa Paani, dubbed the hottest rain number of the 90s, was not even a part of the original brief of the film. Viju Shah, the composer, reveals to BT, “We weren’t supposed to have a rain song in the film. Rajiv Rai (director) told me to compose a romantic number. So, I first came up with the tune and took it to Anand Bakshi (lyricist). He found the tune long and wanted me to shorten it. When I finally managed to convince him after many days, he came up with the hook line Tip Tip Barsa Paani. That’s when we decided to convert it into a rain song. Rajiv created a romantic situation in the film only for this song. I then told Alka Yagnik (singer), ‘Forget the visuals, you have to create ripples with just your singing’. She was scared that I was asking her to sing something sleazy! But she took a leap of faith and agreed to sing without knowing the lyrics. The rest, as they, is history.”

Picturised on Atul Agnihotri and Pooja Bhatt, the visual of the song is not a quintessential rain video, but it’s the lyrics that make it popular. Composer Anu Malik shares, “I loved the hook line, but Mahesh Bhatt (director) completely freaked out on the line — Yeh hai kitna accha shagun. I remember telling Kumar Sanu (singer) to not sing in his usual whispering-soft voice, but in a loud tone.” The song starts inside the classroom and the teacher (Naseeruddin Shah) picks up the guitar in an effort to cheer up his students. He adds, “Bhatt saab had made me compose a guitar refrain especially for this part. After all these years, it’s remembered as a rain song because of its lyrics. It is associated with the monsoon just like my other song, Dekho Baarish Ho Rahi Hai.”

RD Burman‘s swan song, the soundtrack had many poetic numbers, including this gem — Rim Jhim Rim Jhim, which was picturised on Manisha Koirala and Anil Kapoor. You can actually feel the rhythm of the rain dropping on the rooftop with music matching Javed Akhtar‘s lyrical meter. It truly pays an ode to the rains and romance. Kavita Krisnamurti, who sung the number, says, “I remember how Panchamda told both Kumar Sanu and me that we had to sing with the orchestra live. At that time, people used to record duets seperately. But Panchamda wanted to bring out even the minutest of details. Javed saab’s lyrics, like ‘bajta hai jaltarang, teal ki chhat pe jab, motiyon jaisa jal barse’, are so imaginative that you can actually visualise it.

Known to have created many magical monsoon moments in his films, this track was unlike anything Mani Ratnam (director) had done before. Be it AR Rahman‘s composition, Gulzar‘s lyrics, Rajiv Menon’s scenic camera work or Aishwarya Rai Bachchan lighting up the screen with her subtle sensuality, Barso Re celebrates love and rain. Interestingly, the song was shot in the peak of summer and Rajiv says the entire unit travelled across three states in the South in a span of three days to complete the shoot of the popular ‘heroine introduction song’. He recalls, “We’d shot a portion of the song near Kudalasangama in Bagalkot and Hampi (Karnataka) and Chennai when we heard that River Cauvery was in spate. So, to capture its beauty, we rushed to Mysore. But we were shocked because while the river was flooded everywhere else, the city was in drought condition! We finally filmed in Melukote (Karnataka). Mani wanted ducks in the frame, so we arranged for them, too. But the problem was, it was difficult to create rain when the sun is shining bright. So, we shot till 6 pm there. Then, we headed to Athirappilly Falls (Kerala) that night as we wanted to capture waterfalls as well. Later in the day, Mani and I decided to combine both greenery and waterfalls and drove overnight to reach Pollachi (Tamil Nadu), where we completed the rest of the song.”

Santoor maestro Shiv Kumar and flutist Hari Prasad Chaurasia created magic when they composed for films. They also made a habit of capturing the various moods that the rain evokes through songs like Lagi Aaj Sawan Ki (heartbreak), Parbat Se Kaali Ghata (lovers abandon) and Megha Re Megha (celebration of monsoon). However, among all three, it is this number that stood the test of time. Sung by Suresh Wadkar, the haunting number was picturised on Vinod Khanna, Sridevi and Juhi Chawla and remains a rain favourite.”

The song was unlike any sensuous rain song of the 90s. This one was purely a celebration of the rains. If there was any hint of sensuality and chiffon, it was in the presence of Madhuri Dixit dressed in a kurta, not a sari. Since the film was a love triangle (Shah Rukh Khan, Madhuri Dixit and Karisma Kapoor) based in the world of theatre, it had Shiamak Davar featuring as the choreographer of the film. Composer Uttam Singh had once said that the song was meant to capture the spirit of Mumbai rains on the streets and the joy that comes from first rains, first love and surprises.

This one will always be an iconic rain song — Kareena Kapoor Khan’s dance, with carefree abandon, ignites the screen. Composed by Sandesh Shandilya with lyrics by Irshad Kamil, this album was recorded in a tiny studio in South Mumbai. Singer Sunidhi Chauhan recalls, “It was literally, just a two-by-two singers’ booth and I spent hours recording there with no air conditioning. I think what makes this such a popular baarish number is that Kareena emoted and expressed herself very beautifully.” 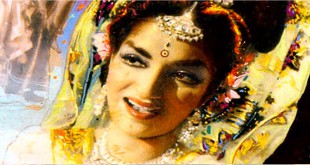