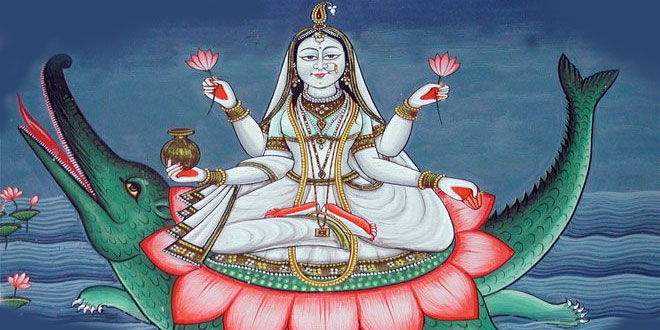 Ganga, the River Goddess is the only living goddess in the Hindu pantheon. There are numerous stories regarding the birth and origin of this goddess. According to the beliefs, Ganga descends on the earth to rinse away the sins of the mankind. Ganga is the sacred river and has been referred to in the various ancient texts of Hindus. It is believed that Ganga used to flow in the heaven and sanctify gods with her holy waters.

River Ganges is repeatedly invoked in the Puranas, the Vedas, the Ramayana and the Mahabharata. The story of Ganga’s descent on the Earth appears slightly different in Ramayana, Mahabharata and the Puranas. According to one story, Ganga is also considered as the sister of Parvati, the consort of Lord Shiva being one of the two daughters of Himavat and Meru. According to another legend, Indra had asked for Ganga to be given to heaven to calm the Gods with her cool waters.

One story states that the sacred water in Brahma’s Kamandalu (water-vessel) is personified as a maiden, Ganga. Another legend tells that Brahma had respectfully washed the feet of Vishnu and collected this water in his Kamandalu. Being the part of the Kamandalu of Lord Brahma, Ganga is one of the Shaktis of the supreme Goddess Mahamaya Adishakti.

This is the most popular story regarding the origin of river Ganga. The story goes far back when King Sagar magically acquired sixty thousand sons. Once, King Sagar organized Ashwamedh Yagna, a ritual of worship for the benefit of the kingdom. Jealous Indra planned a mischief and stole one horse from the place. King Sagar sent all his sons all over the earth to look for the horse. They found the horse in the nether-world standing next to Kapila Muni, a meditating sage. The youths, were disrespectful and caused his penance to be disturbed. The sage reduced them to ashes with his withering look.

The souls of these young men wandered as ghosts as their final rites had not been done. On repeated repentance and requests by the descendants of King Sagar, Kapila Muni finally relent that King Sagar’s sons would attain mukti (liberation), if their wicked remains are cleansed by the water of the goddess Ganga. Generations of King Sagar did penance to appease Brahma but without success and finally after much praying, pleading and tapasya by Bhagirath – seventh generation of King Sagar, Ganga reluctantly consents to descend to earth.

With this, Ganga found herself insulted and decided to sweep the whole earth with her powerful fall. Troubled, Bhagiratha prayed to Shiva to control the Ganga’s descent. Lord Shiva steps in the way and trapped Ganga in his hair. Shiva made the river fall gently through his long hair onto the Himalayas. As Ganga moved to the nether-worlds, she liberated the unfortunate souls of King Sagar’s Sons. Since then Ganga is sanctifying the mankind with her divine waters.