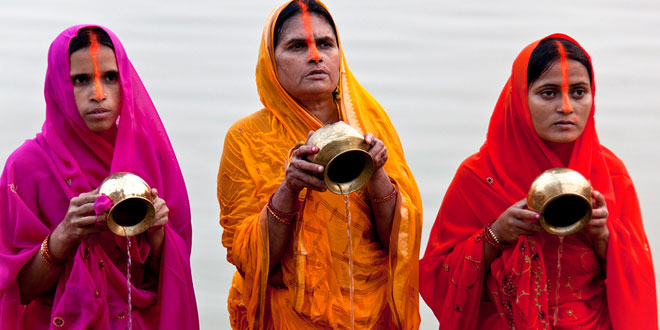 Chhath Puja Fast: Chhath Puja falls on the sixth day of the Kartik month of Hindu lunar calendar and somewhere in the month of October or November according to the Christian calendar. The words Chhath means the number six of the Indian numeric system, as festival is celebrated on the sixth day of the Kartik month. The Chhath Puja has roots deep rooted in the Hindu mythology and there are different legends too which speak about such festivals. Rig Veda the first Veda contains hymns which can be sung for worshiping the Sun God and it also describes some rituals which are similar to the Chhath rituals. The epic Mahabharata contains depictions of princess Draupadi observing similar rites on advice of the sage Dhaumya to regain the lost kingdom. A legend also states that Karna was the one who started the ritual of Chhath for pleasing his father the Sun God. In the ancient times, the rishis used to conduct the ritual of Chhath to gain energy directly from the sun and not from any other available source.

Chhath Puja vrat or the Chhath Puja fast is a ritualistic practice followed enthusiastically during the festival of Chhath. Also known as Dal Chhath, the festival is dedicated to Sun God. Sun is a major source of energy and hence is considered as a symbol of sustenance of life. Apart from it, Sun is also considered as the generous God of Prosperity and Wisdom. The rituals which are performed during the worship of the Sun God are supposed to cure leprosy and help the devotees in living a long prosperous life. The festivities consist of four days meant for fasting and penance by standing inside the water for long times. Chhath Puja vrat is observed for three days, starting from the second day. Worshipers observe fast or upvaas, known as Kharna, from sunrise until the evening, when the sun sets. Puja is performed and the deities are offered with kheer, sweets and fruits.

On the first day of Chhath, the Parvaitins are supposed to take only one meal during the day that too after the sunset. On the second day, the Parvaitins are supposed to fast the whole day and are supposed to break bread only after the sunset when they are done with the Puja. Thereafter, Parvaitins go on a fast for next 36 hours, without food and water. They open their fast on the fourth day after they offer prayers to the rising sun in the morning. Parvaitins along with their family members visit River Ganges before sun rise. With folded hands, they welcome the Sun, offering sandalwood, vermillion, rice and fruits covered in saffron colored cotton cloth. Chanting of the mantras and hymns are done continuously. Fasting, thus, is an integral part of this festival which is observed rigorously by the Parvaitins.