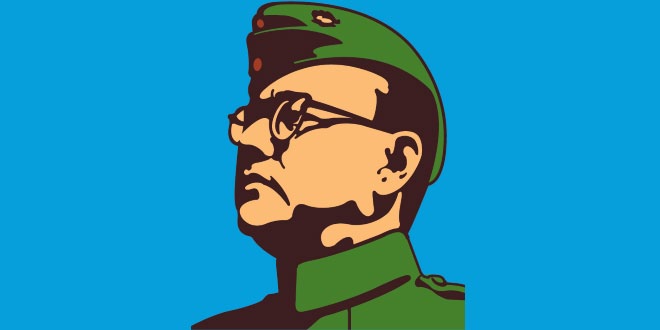 Subhas Chandra Bose (23 January 1897 – 18 August 1945 (aged 48) was an Indian nationalist whose attempt during World War II to rid India of British rule with the help of Nazi Germany and Japan left a troubled legacy. The honorific Netaji (Hindustani language: “Respected Leader”), first applied to Bose in Germany, by the Indian soldiers of the Indische Legion and by the German and Indian officials in the Special Bureau for India in Berlin, in early 1942, was by 1990 used widely throughout India.

Subhas Chandra Bose, affectionately called as Netaji, was one of the most prominent leaders of Indian freedom struggle. Though Mahatma Gandhi and Jawaharlal Nehru have garnered much of the credit for successful culmination of Indian freedom struggle, the contribution of Subash Chandra Bose is no less. He has been denied his rightful place in the annals of Indian history. He founded Indian National Army (Azad Hind Fauj) to overthrow British Empire from India and came to acquire legendary status among Indian masses.

Subhas Chandra Bose’s father Janaki Nath Bose was a famous lawyer and his mother Prabhavati Devi was a pious and religious lady. Subhas Chandra Bose was the ninth child among fourteen siblings. Subhas Chandra Bose was a brilliant student right from the childhood. He topped the matriculation examination of Calcutta province and graduated with a First Class in Philosophy from the Scottish Churches College in Calcutta. He was strongly influenced by Swami Vivekananda’s teachings and was known for his patriotic zeal as a student. To fulfill his parents wishes he went to England in 1919 to compete for Indian Civil Services. In England he appeared for the Indian Civil Service competitive examination in 1920, and came out fourth in order of merit. However, Subhas Chandra Bose was deeply disturbed by the Jallianwalla Bagh massacre, and left his Civil Services apprenticeship midway to return to India in 1921.

After returning to India Netaji Subhash Chandra Bose came under the influence of Mahatma Gandhi and joined the Indian National Congress. On Gandhiji’s instructions, he started working under Deshbandhu Chittaranjan Das, whom he later acknowledged his political guru. Soon he showed his leadership mettle and gained his way up in the Congress’ hierarchy. In 1928 the Motilal Nehru Committee appointed by the Congress declared in favor of Domination Status, but Subhas Chandra Bose along with Jawaharlal Nehru opposed it, and both asserted that they would be satisfied with nothing short of complete independence for India. Subhas also announced the formation of the Independence League. Subhas Chandra Bose was jailed during Civil Disobedience movement in 1930. He was released in 1931 after Gandhi-Irwin pact was signed. He protested against the Gandhi-Irwin pact and opposed the suspension of Civil Disobedience movement specially when Bhagat Singh and his associates were hanged.

Subash Chandra Bose was soon arrested again under the infamous Bengal Regulation. After an year he was released on medical grounds and was banished from India to Europe. He took steps to establish centres in different European capitals with a view to promoting politico-cultural contacts between India and Europe. Defying the ban on his entry to India, Subash Chandra Bose returned to India and was again arrested and jailed for a year. After the General Elections of 1937, Congress came to power in seven states and Subash Chandra Bose was released. Shortly afterward he was elected President of the Haripura Congress Session in 1938. During his term as Congress President, he talked of planning in concrete terms, and set up a National planning Committee in October that year. At the end of his first term, the presidential election to the Tripuri Congress session took place early 1939. Subhas Chandra Bose was re-elected, defeating Dr. Pattabhi Sitaramayya who had been backed by Mahatma Gandhi and the Congress Working Committee. Clouds of World War II were on the horizon and he brought a resolution to give the British six months to hand India over to the Indians, failing which there would be a revolt. There was much opposition to his rigid stand, and he resigned from the post of president and formed a progressive group known as the Forward Block.

Subhas Chandra Bose now started a mass movement against utilizing Indian resources and men for the great war. There was a tremendous response to his call and he was put under house arrest in Calcutta. In January 1941, Subhas Chandra Bose disappeared from his home in Calcutta and reached Germany via Afghanistan. Working on the maxim that “an enemy’s enemy is a friend”, he sought cooperation of Germany and Japan against British Empire. In January 1942, he began his regular broadcasts from Radio Berlin, which aroused tremendous enthusiasm in India. In July 1943, he arrived in Singapore from Germany. In Singapore he took over the reins of the Indian Independence Movement in East Asia from Rash Behari Bose and organised the Azad Hind Fauj (Indian National Army) comprising mainly of Indian prisoners of war. He was hailed as Netaji by the Army as well as by the Indian civilian population in East Asia. Azad Hind Fauj proceeded towards India to liberate it from British rule. Enroute it liberated Andaman and Nicobar Islands. The I.N.A. Head quarters was shifted to Rangoon in January 1944. Azad Hind Fauj crossed the Burma Border, and stood on Indian soil on March 18, 1944.

However, defeat of Japan and Germany in the Second World War forced INA to retreat and it could not achieve its objective. Subhas Chandra Bose was reportedly killed in an air crash over Taipei, Taiwan (Formosa) on August 18, 1945. Though it is widely believed that he was still alive after the air crash not much information could be found about him.