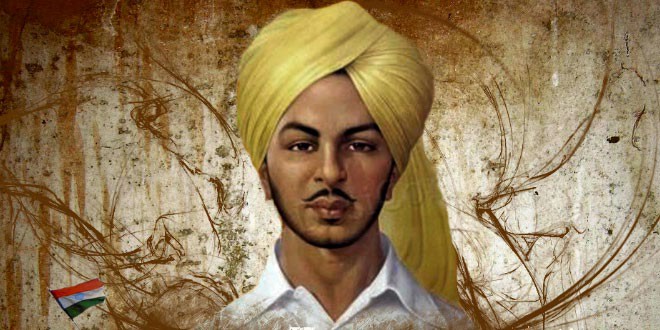 Bhagat Singh was born on September 28, 1907, in Khatkar Kalan, Punjab, in British India. His grandfather Arjan Singh, father Kishan Singh and uncle Ajit Singh, were all active in the freedom struggle.

While studying at the local D.A.V. School in Lahore, in 1916, young Bhagat Singh came into contact with some well-known political leaders like Lala Lajpat Rai and Ras Bihari Bose.

In response to Mahatma Gandhi’s call for non-cooperation against British rule in 1921, Bhagat Singh left his school and joined the National College newly opened at Lahore. At this college, which was a center of revolutionary activities, he came into contact with revolutionaries such as Bhagwati Charan, Sukhdev and others. He became a member of the Hindustan Republican Association formed by the revolutionaries of Uttar Pradesh and was initiated into their firebrand activities.

The revolutionaries were branded as terrorists by the British government. They believed that given the unjust and oppressive nature of British rule, it was legitimate on their part to use violence as a weapon to overthrow the foreigners. So, they used bombs and guns against Britishers and robbed establishments belonging to the British or their sympathizers.

Their ideas differed from the Gandhian idea of a freedom movement based on non-violence or ahimsa. Gandhi’s ideas went on to become more prominent as the Indian freedom movement progressed.

But it is not merely as a bold militant-type figure that Bhagat Singh is remembered today. He was also a thinker who was steeped in the best traditions of socialistic thought, the theory that advocated collective or state ownership of the means of production – land, labour and capital. This is borne out in the numerous letters, pamphlets and articles that he wrote in the course of a short but turbulent life.

In a letter to an Indian publication, The Tribune of December 24, 1929, Bhagat Singh explained beautifully the meaning he and fellow socialists tried to convey by the phrase, Long Live Revolution. He wrote that by revolution, they did not so much mean violence, as “the spirit, the longing for a change for the better.” Since people generally get accustomed to the established order of things and begin to tremble at the very idea of a change, they needed to be roused from their lethargy and the revolutionary spirit had to be instilled in them.

A brutal attack by the police on veteran freedom fighter Lala Lajpat Rai at an anti-British procession caused his death on November 17 1928, in Lahore.

Bhagat Singh determined to avenge Lajpat Rai’s death by shooting the British official responsible for the killing, Deputy Inspector General Scott. He shot down Assistant Superintendent Saunders instead, mistaking him for Scott.

Then he made a dramatic escape from Lahore to Calcutta and from there to Agra, where he established a bomb factory.

The British government responded to the act by imposing severe measures like the Trades Disputes Bill. It was to protest against the passing of the Bill that he threw bombs in the Central Assembly Hall while the Assembly was in session. The bombs did not hurt anyone, but the noise they made was loud enough to wake up an enslaved nation from a long sleep.

After throwing the bombs, Bhagat Singh and his friend deliberately courted arrest by refusing to run away from the scene. During his trial, Bhagat Singh refused to employ any defence counsel.

In jail, he went on hunger strike to protest the inhuman treatment of fellow-political prisoners by jail authorities. Along with fellow comrades, Sukh Dev and Raj Guru, he was awarded the death sentence for his terrorist activities by a special tribunal on October 7, 1930.

Despite great popular pressure and numerous appeals by political leaders of India, Bhagat Singh and his associates were hanged in the early hours of March 23, 1931. Their bodies were cremated on the bank of the Sutlej in Ferozepur. Bhagat Singh was just 23 at that time. Old timers say that in many places, not a single hearth fire burned that day.

The last paragraph of the leaflet that he distributed (and wrote) in the Assembly Hall said: “We are sorry that we who attach such great sanctity to human life, we who dream of a very glorious future when man will be enjoying perfect peace and full liberty, have been forced to shed human blood. But sacrifice of individuals at the altar of the revolution will bring freedom to all, rendering exploitation of man by man impossible. Inquilaab Zindaabad (Long live the revolution).”

There was a time when the very mention of the name of the young revolutionary stirred the passions of most Indians. Today, the name evokes little emotion.

The method of remembering him, too, has become mechanical. The day Bhagat Singh was hanged is observed as Martyr’s Day, when the chief minister of Punjab makes a trip for a memorial function in Bhagat Singh’s memory. Needless to say, the politicians have used this occasion more for their ends.

And as for the children of the village, the high point for them is seeing the helicopter in which the chief minister travels.

Bhagat Singh continues to be martyred by the very people of the country whose freedom he fought for. And that is the biggest irony of all.