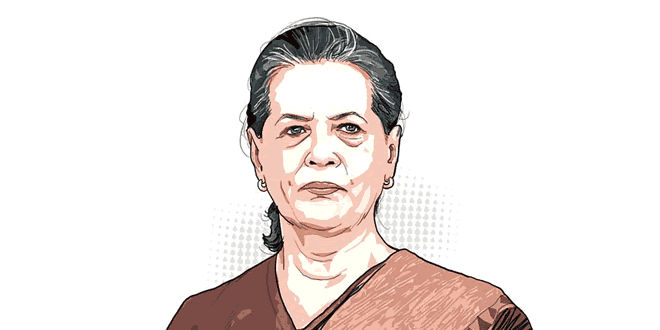 Sonia Gandhi (born Edvige Antonia Albina Màino, 9 December 1946) is an Italian-born Indian politician, who has served as President of the Indian National Congress party since 1998. She is the widow of former Prime Minister of India, Rajiv Gandhi who belonged to the Nehru–Gandhi family. After her husband’s assassination in 1991, she was invited by Congress leaders to take over the government but she refused and publicly stayed away from politics amidst constant prodding from the party. She finally agreed to join politics in 1997; in 1998, she was elected President of the Congress party.

She has served as the Chairperson of the ruling United Progressive Alliance in the Lok Sabha since 2004. In September 2010, on being re-elected for the fourth time, she became the longest serving president in the 125-year history of the Congress party. Her foreign birth has been a subject of much debate and controversy. Also controversial was her alleged friendship with Italian businessman Ottavio Quattrocchi, accused of being a middleman in the Bofors scandal. Although Sonia is the fifth foreign-born person to be leader of the Congress Party, she is the first since independence in 1947.

Sonia Gandhi entered the Indian scene as the demure Italian bride of Rajiv Gandhi. Other than maybe the surname, she had nothing to do with mainstream politics. And as she went on to prove, she wasn’t even interested. But circumstances intervened. A reluctant politician at first, she took charge of the congress party in 1998 and received enough flak when Congress fared badly in the 1999 elections. And then 2004 happened. With one deft stroke, Sonia Gandhi turned herself from outsider to future Prime Minister to the paragon of sacrifice. By refusing the Prime Ministership, she took the wind out of the sails of BJP’s single-point agenda; should a foreigner become India’s PM. But that’s Sonia Gandhi, the master of re-invention. Since then, Sonia has played the role of kingmaker, consciously keeping herself away from controversies. She is quietly grooming son Rahul for bigger things in future. A smart move, shall we say!

Born to Stefano and Paola Maino in Orbassano, a town 20 km from Turin, Italy, she spent her adolescence in Orbassano being raised in a conservative Roman Catholic family and attending a Catholic school. Her father, a building contractor, died in 1983, but her mother and two sisters still live around Orbassano. While doing a course in English in a language school in Cambridge (not in Cambridge University), England she met Rajiv Gandhi, who later became Prime Minister of India. They were married in 1968, after which she took up residence in India. She retained her Italian citizenship for 15 years thereafter and acquired Indian citizenship only in 1983, (though she was eligible for citizenship after five years of residence in India. This compounded the opposition to her being appointed the Prime Minister of India on account of her foreign origin). The couple had two children, Rahul Gandhi (born 1970) and Priyanka Gandhi (born 1972).

Following her husband’s assassination on May 21, 1991, there were calls for her to enter politics by members of the Congress Party. After her refusal, the party settled on the choice of P V Narasimha Rao as leader and, subsequently, Prime Minister. She finally entered politics just before the 1998 national election. She officially took charge of the Congress party as the party president in 1998 and was elected to parliament in the elections held in 1999. She was elected the Leader of the Opposition of the 13th Lok Sabha in 1999.

During her campaign, her opponents (chiefly the Bharatiya Janata Party, a party whose leaders claimed that Sonia Gandhi had done nothing to India other than producing two children.) played up her foreign birth, her failure to take up Indian citizenship for 15 years after her marriage, and her lack of fluency in Hindi. In May 1999, Sonia Gandhi offered to resign from the Congress Party leadership after three senior leaders challenged her right to try to become India’s Prime Minister given that she was someone “not born of Indian soil”, following which there was a split in the congress party and the three senior leaders formed a new party i.e. The Nationalist Congress Party.

In the Indian general elections, 2004, when the ruling National Democratic Alliance (NDA) was set to win a majority (as per almost opinion polls, allegedly rigged), Sonia, launched an aggressive campaign, criss-crossing the country on the ‘Aam Aadmi’ (Ordinary people) slogan in contrast to the ‘India Shining’ (a campaign that was financed by the then HR ministry with a budget outlay of 400 crores) slogan of the right wing BJP-led NDA alliance. After her party’s surprise victory, she was tipped to be the next Prime Minister of India. On May 16, she was unanimously voted to lead a 15-party coalition government which was subsequently named the United Progressive Alliance (UPA). However, there was serious opposition to her being appointed as Prime Minister of India on account of her foreign origin. Many right wing Bharatiya Janata Party (BJP) leaders also took up this issue against Sonia (most notably, the threat, by former minister in the Vajpayee Government Sushma Swaraj, to shave her head and sleep on the floor if Sonia Gandhi became Prime Minister, an indian woman does this only on the death of her husband). They contended that she was not only a foreigner but also a political novice with no experience in public life (she was the Leader of the Opposition, a post equivalent to a Cabinet Rank in the Indian Government, for four years.

On May 18, a day before her scheduled inauguration, in a politically ‘shrewd’ move (as per her critics) or reasonable (as per her supporters), in view of the opposition to her candidature from outside and within the coalition, she suggested economist Manmohan Singh for the Prime Minister’s post. Manmohan Singh was the Finance Minister in a previous Congress government headed by Rao and is considered by many as the Father of Indian Reforms. Moreover, the fact that he was not known to have any political ambitions and that he enjoyed a good rapport with Ms Gandhi probably helped him to win the post.

Ms Sonia Gandhi retained the post of the Leader of the Majority and the Chairperson of the Congress Parliamentary Party. This arrangement enabled her to keep political control of the party and to deal with many political fire fights among UPA alliance while leaving the management of the country in hands of Manmohan Singh.

Gandhi has authored two books: ‘Rajiv’ and ‘Rajiv’s World’. In addition, she has also edited ‘Freedom’s Daughter’ and ‘Two Alone, Two Together’ (two volumes of letters exchanged between Jawaharlal Nehru and Indira Gandhi from 1922 to 1964).