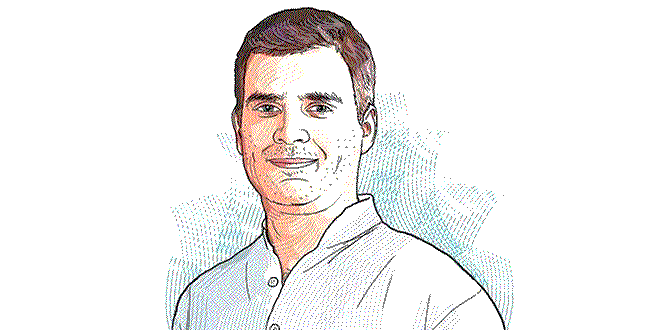 Rahul Gandhi (born 19 June 1970) is an Indian politician and member of the Parliament of India, representing the Amethi constituency. Gandhi is the general-secretary of the Indian National Congress. He is the grandson of Feroze Gandhi and Indira Gandhi, and fourth generation scion of the Nehru Gandhi family.

Rahul Gandhi attended St. Columba’s School, Delhi before entering The Doon School in Dehradun (Uttarakhand), also his father’s alma mater, from 1981–83. Meanwhile, his father had joined politics and became the Prime Minister on October 31, 1984 when Indira Gandhi was assassinated. Due to the security threats faced by Indira Gandhi’s family from Sikh extremists, Rahul Gandhi and his sister, Priyanka were home-schooled since then. Rahul Gandhi joined St. Stephen’s College, Delhi in 1989 for his undergraduate education but moved to Harvard University after he completed the first year examinations. In 1991, after Rajiv Gandhi was assassinated by LTTE during an election rally, he shifted to Rollins College due to security concerns and completed his B.A. in 1994. During this period, he assumed the pseudonym Raul Vinci and his identity was known only to the university officials and security agencies. He further went on to obtain a M.Phil from Trinity College, Cambridge University in 1995. After graduation, Rahul Gandhi worked at the Monitor Group, a management consulting firm, in London. In 2002 he was one of the directors of Mumbai-based technology outsourcing firm Backops Services Private Ltd.

In March 2004, he announced his entry into politics by announcing that he would contest the May 2004 elections, standing for his father’s former constituency of Amethi in Uttar Pradesh in the Lok Sabha, India’s lower house of Parliament. The seat had been held by his mother until she transferred to the neighboring seat of Rae Bareilly. The Congress had been doing poorly in Uttar Pradesh, holding only 10 of the 80 Lok Sabha seats in the state at the time. At the time, this move generated surprise among political commentators, who had regarded his sister Priyanka as being the more charismatic and likely to succeed. It generated speculation that the presence of a young member of India’s most famous political family would reinvigorate the Congress party’s political fortunes among India’s youthful population In his first interview with foreign media, he portrayed himself as a uniter of the country and condemned “divisive” politics in India, saying that he would try to reduce caste and religious tensions.

He won with a landslide majority, retaining the family stronghold with a margin of over 100,000 as the Congress unexpectedly defeated the ruling Bharatiya Janata Party. Until 2006 he held no other office.

Gandhi and his sister, who is married to Robert Vadra, managed their mother’s campaign for re-election to Rae Bareilly in 2006, which was won easily with a margin greater than 400,000 votes.

He was a prominent figure in the Congress campaign for the 2007 Uttar Pradesh Assembly elections; Congress, however, won only 22 seats with 8.53% of votes.

Rahul Gandhi was appointed a general secretary of the All India Congress Committee on 24 September 2007 in a reshuffle of the party secretariat. In the same reshuffle, he was also given charge of the Indian Youth Congress and the National Students Union of India.

He has however, fallen victim to negative sentiments echoing on various online media. While his probable contender, Narendra Modi has been garnering the highest percentage of online mentions, as per a Blogworks report – the negative sentiment for Rahul Gandhi has increased from 27% in June to a whopping 82% in July 2013.

How all this translate will be seen both in the forthcoming Assembly elections of 2013 as well as the Lok Sabha elections of 2014. What impact will the Rahul Gandhi factor have on the performance of the Congress Party, and what impact will the performance of the Congress Party in these forthcoming elections have on the future political career of Rahul Gandhi? Will the reluctant politician make a bigger impact or will he become less relevant – the answers may lie in the hands of the Indian voters.

Previous Patanjali Biography For Students And Children
Next Mahatma Gandhi and General Cariappa: Sage and the soldier