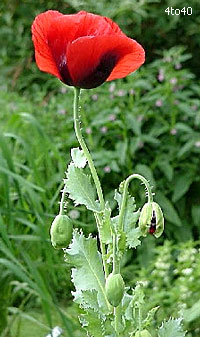 The Opium Poppy, Papaver somniferum, is the type of poppy from which opium and many refined opiates, including morphine, thebaine, codeine, papaverine, and noscapine, are extracted. The binomial name means, loosely, the “sleep-bringing poppy”, referring to its narcotic properties. The seeds are important food items, and contain healthy oils used worldwide in the culinary arts. The plant itself is valuable for ornamental purposes, and has been known as the “common garden poppy”. It is widely grown in ornamental gardens throughout Europe, North America, South America, and Asia.

The opium poppy (Papaver somniferum), an annual herb 3-5 feet tall with gorgeous white to pink or purple flowers, has had a powerful impact on human affairs as a medical blessing and a societal curse.

Papaver somniferum is a species of plant with many sub-groups or varieties. Colors of the flower vary widely, as do other physical characteristics such as number and shape of petals, number of pods, production of morphine, etc.

Tasmania, Turkey and India are the major producers of poppy for medicinal purposes and poppy-based drugs, such as morphine or codeine. The USA has a policy of sourcing 80% of its narcotic raw materials from the traditional producers, India and Turkey.

A recent initiative to extend opium production for medicinal purposes called Poppy for Medicine was launched by The Senlis Council which proposes that Afghanistan could produce medicinal opium under a scheme similar to that operating in Turkey and India. The Council proposes licensing poppy production in Afghanistan, within an integrated control system supported by the Afghan government and its international allies, to promote economic growth in the country, create vital drugs and combat poverty and the diversion of illegal opium to drug traffickers and terrorist elements. Interestingly, Senlis is on record advocating reintroduction of poppy into areas of Afghanistan, specifically Kunduz, which has been poppy free for some time.