Uses: It is Tonic, Abortifacient, Astringent, Deobstruent, Nervine, Aphrodisiac and Sedative. It is official Indian Pharmacoepeia. It is popularly known as Indian Ginseng. It gives vitality and vigour and helps in building greater endurance. It has been used in diseases such as rheumatism, leprosy and arthritis. 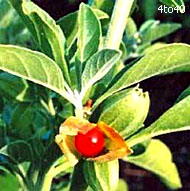 Ashwagandha is a sweet root with secondary bitter qualities. It is found in India and Africa. and is also called “Indian ginseng”. There are no known side effects of this herb. Ayurvedic practitioners have been using Ashwagandha root for thousands of years as a powerful rasayana (a tonic for greater vitality and longevity). The herb has traditionally been used for calming the mind, relieving weakness, nervous exhaustion and arthritis, and for building sexual energy. Ashwagandha root is beneficial to people who do physical labor or exercise a lot to help the body adapt to physical stress. Ashwagandha herb has also been used for strengthening the female reproductive system.

Ashwagandha plant is native to India. The plant is cultivated as an annual crop and this herb can also be grown with in most home gardens. Ashwagandha plant is erect, 30-150 cm high with fleshy roots which is whitish brown in colour. Leaves are simple and ovate. Flowers looks like lucid-yellow or greenish and it contains small berries which is orange-red in colour. Fruits are orange-red, containing many seeds. Florescence occurs in fall and spring.

Traditionally, Ashwagandha herb has been used as a sedative, a diuretic, a rejuvenating tonic, an anti-inflammatory agent, and as an “adaptogen” (endurance enhancer). Many Western herbalists refer to this herb as “Ayurvedic ginseng” because of its reputation for increasing energy, strength, and stamina, and for its ability to relieve stress.

Withanolides are the most important bio-active constituents present in roots of Ashwagandha. Withanolides are believed to account for the multiple medicinal applications of Ashwagandha. These molecules are steroidal and bear a resemblance, both in their action and appearance, to the active constituents of Asian ginseng (Panax ginseng) known as ginsenosides.