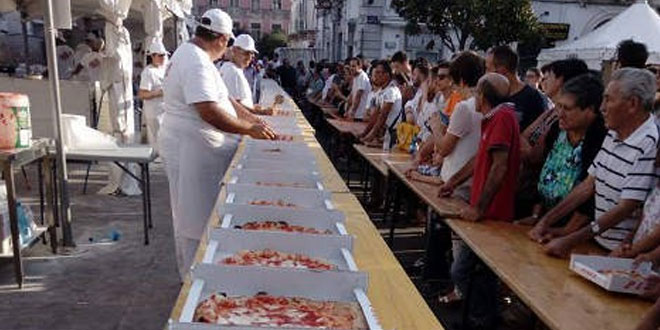 Italy Guinness World Record: Most pizzas made in 12 hours

Rome, Italy – September 21, 2016 – A team of 43 Italian pizza chefs broke the Guinness World Record for most pies cooked within 12 hours at the Festa della Pizza in Martina Franca, Italy; the team of pizza makers from across Puglia made 5,836 pizzas in total, thus setting the new world record for Most pizzas made in 12 hours.

Photo: Hard-working pizza chefs cooked up a record-breaking 5,836 pizzas in around 12 hours in the southern region of Puglia. It was a team effort of 43 pizza-makers, many from Italy’s association of qualified pizza chefs, who gathered in Martina Franca, in Puglia, southern Italy.

The Guinness World Records world record for the most pizzas made in one hour is 206 and was achieved by Brian Edler (USA) at the Domino’s Pizza store on North Main St. Findlay, Ohio, USA, on 9 December 2010.

Guinness World Records also recognized the world record for the longest line of pizzas measured 541.8 m (1,777 ft 10 in) and was achieved by the Van Duzer Foundation and the St. Lucie County Education Foundation (both USA) in Fort Pierce, Florida, USA, on 16 May 2009.

The previous Guinness World Records world record of 5,070 – which had been set in Chiasso, Switzerland, in June 2015 by the Naples Academy of Pizza – was broken after ten hours and 23 minutes, and the Pugliese chefs went on to bake a further 766 delicious pies.

The Pugliese team beat the record in 10 hours and 23 minutes, then went on to make an additional 766 pies before time was up.

The team used five ovens to churn out their pies at lightning speed. And the pizzas weren’t all just plain cheese. Chefs whipped out gluten-free and dairy-free pies, and pizza topped with capocollo and buffalo mozzarella.

The record attempt was the finale of the town’s three-day pizza-themed celebration at the weekend, which saw a total of 11,000 pizzas baked and eaten.