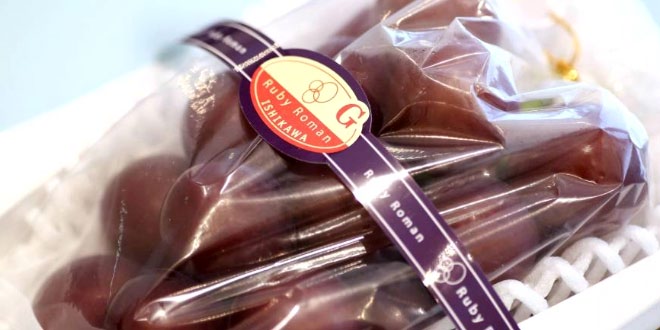 Photo: A bunch of Ruby Roman grapes sold for 1.1 million yen, which is approximately £8400 in the central Japanese city of Kanazawa. The bunch was the very first of the season and contained about 30 grapes, each slightly smaller than a ping pong ball, and each weighing at least 20 grams.

The Guinness World Records world record for the most people treading grapes is 977 and was achieved by ACOBASA (Spain), at an event organised by Leticia Alfaya Lozano (Spain) in Labastida, Álava, Spain on 25 September 2010.

Guinness World Records also recognized the world record for the most juice extracted by treading grapes in one minute is 8.6 litres (1.89 gal) achieved by Martina Servaty (Germany) on Live! with Regis and Kelly in New York, New York, USA, on 16 September 2011.

The grapes are grown in Ishikawa prefecture, and to qualify for the Ruby Roman designation, each grape must weigh at least 20g and have a sugar content of at least 18%.

According to the Ruby Roman club website run by the Ishikawa prefecture, the cultivation process began in 1992 when seeds of the Fujiminori variety were sown. Over the years, they were then cultivated into the Roman Ruby variety, which was named after submissions from the public in 2004.

Photo: A famous Japanese buyer of premium fruits Takamaru Konishi, 37, will be offering a tasting event free of charge to his customers at his supermarket in Hyogo Prefecture, Southwestern Japan.

The first grapes went on sale in 2008, and prices have been rising ever since. Seasonal fruit offerings in Japan routinely attract large sums from buyers seeking social prestige, or from shop owners keen to attract customers.

The sale kicks off the auction season for Ruby Romans in Japan. Other fruits, from apples to watermelons, can also fetch huge sums under the hammer.