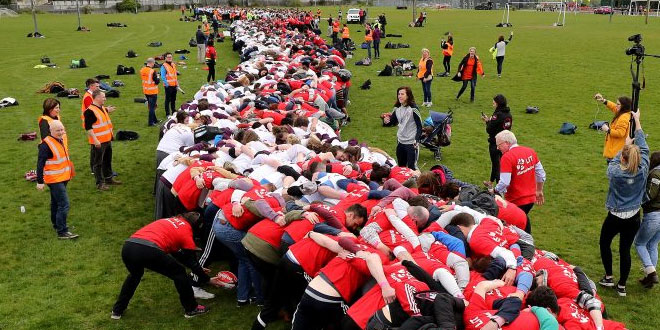 Limerick, Ireland – April 13, 2017 – Anthony Foley’s sister Rosie was in attendance as 1,740 people came together for a ‘Scrum for Axel’ to honour the former Munster head coach at Limerick Institute of Technology; the event saw the existing Guinness World Record for the largest scrum ever of just short of 1,600 turned over as 1,740 put their shoulders behind the initiative.

Photo: The World’s Largest Rugby Scrum formation was in keeping with the standard scrum; three front rows, two second rows and three back-rows locking down in repeat scrums side by side the length of the institute’s GAA pitches.

Guinness World Records also recognized the world record for the largest rugby tour; it consisted of 264 players and coaches from Ealing Rugby Club (UK) who played matches in Ireland between 11 and 14 April 2003.

Held at the Institute’s headquarters at Moylish, where Foley himself attended before taking up a professional career in rugby, the event saw the existing World Record for the largest scrum ever of just short of 1,600 turned over as 1,740 put their shoulders behind the initiative, according to The Independent Sport Ireland.

Young and old, from Limerick Institute of Technology students and staff, to local primary schools, rugby clubs, fathers and mothers, sons, daughters, right up to pensioners all joining to create this special tribute to the heroic Shannon, Munster and Ireland rugby legend who died suddenly last October.

Anthony’s sister Rosie, herself a former Ireland rugby international, was on hand to help set the scrum. Adjudicators from Ernst and Young were present for the record-breaking attempt.

Share
Previous Easter Day: Christian Culture & Traditions
Next Greatest Distance on a Motorcycle in 24 Hours on a track