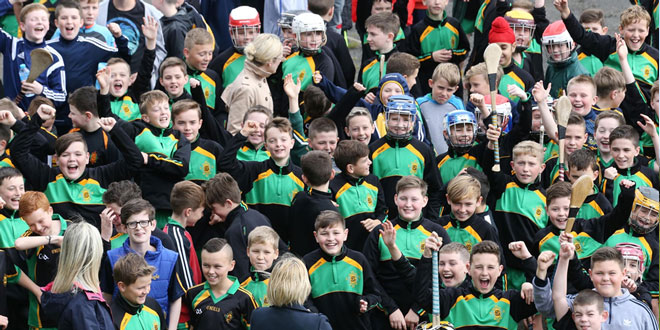 The Guinness World Records world record for the largest yoga lesson involved 54,522 participants and was achieved by the Department of Sports, Youth and Cultural Activities, Government of Gujarat, Patanjali Yogpeeth and taught by Yog Rishi Swami Ramdev ji Maharaj (all India), at the GMDC Ground in Ahmedabad, Gujarat, India, on 21 June 2017.

Guinness World Records also recognized the world record for the largest surfing lesson; it involves 320 people and was achieved by RedBalloon (Australia) at Bondi Beach in Sydney, New South Wales, Australia, on 15 December 2015.

St Mary’s headmaster John Martin revealed: “We put together zones on the pitch and had 46 pupils in a zone. Ulster GAA were good enough to lend us coaches and we used our own coaches as well. There were a couple of coaches with every group, just under 50 all doing the same drill.”

As part of the mammoth effort, all pupils of different hurling abilities were involved – from those who are already experienced hurlers and were part of last year’s successful Mageean Cup winning outfit, to 11-year-olds who wouldn’t have held a hurl until they walked into the school in September.

The idea came from Sean McGourty, a well-known figure in Antrim and Ulster GAA, along with former Antrim player Donagh Finnegan, who is a bursar at St Mary’s, The Belfast Telegraph reports.

Hurling (Irish: iománaíocht, iomáint) is an outdoor team game of ancient Gaelic and Irish origin, administered by the Gaelic Athletic Association (GAA). The game has prehistoric origins, and has been played for 3,000 years. One of Ireland’s native Gaelic games, it shares a number of features with Gaelic football, such as the field and goals, the number of players, and much terminology.

The event was organised by the school as a way of celebrating the hurling and sporting associations of St Mary’s and to promote a healthy and positive lifestyle among the pupils.

The school was assisted by Allianz, local GAA coaches and other voluntary organisations including the St John’s Ramblers and principal John Martin hailed the combined voluntary effort.