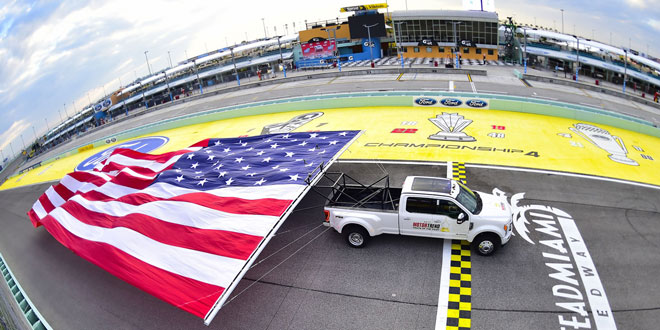 The Guinness World Records world record for the most people waving flags is 56,618, achieved by Punjab Youth Festival 2014, organized by Sports Board Punjab at the National Hockey Stadium in Lahore, Pakistan, on 1 March 2014.

Guinness World Records also recognized the world record for the most different flags flown simultaneously; it is 240 and was achieved at an event organised by Rotary International District 5950 (USA) at the Mall of America in Bloomington, Minnesota, USA on 16 May 2015.

The record eclipses the previous Guinness world record set earlier this year by Chevrolet with a 40 by 80-foot flag at Texas Motor Speedway on September 28th.

With its 6.7-liter Power Stroke® turbo diesel V8 producing a best-in-class 925 lb.-ft. of torque and 440 horsepower, the F-450 displayed an exceptional level of towing power that Ford truck owners have come to expect from the top-selling truck series in America.

“At Ford and with Ford trucks in particular we are used to being number one,” said Doug Scott, Ford Truck Group Marketing Manager.

To set the record, the truck had to travel beyond the 100 meters (328 feet) previous record mark, without the flag touching the ground.

To accommodate the record setting flag, 45-foot riggings from eyelet to eyelet were constructed enabling the F-450 a driving roll-out of the massive flag. A team of 20 launched and retrieved the flag, ensuring it did not touch the ground.