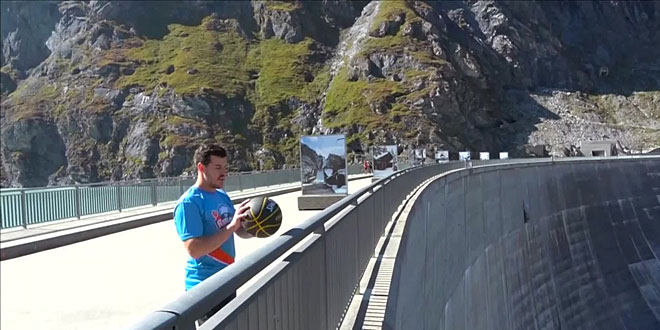 Photo: An Australian trio has broken the world record for the highest basketball shot, launching the ball from the top of a dam in Switzerland. It took the group, consisting of Brett Stanford, Derek Herron and Scott Gaunson, three attempts to make the shot.

The Guinness World Records world record for the greatest height from which a basketball is shot is 180.968 m (593.73 ft) and was achieved by Brett Stanford, Derek Herron and Scott Gaunson from ‘How Ridiculous’ (Australia), at Mauvoisin Dam, Valais, Switzerland, on 26 September 2016.

Guinness World Records also recognized the world record for the longest successful basketball shot; it measured 34.29 m (112 ft 6 in) and was achieved by Elan Buller (USA) in Oak Park, California, USA, on 9 September 2014.

Derek Herron, Scott Gaunson and Brett Stanford compose a trio called ‘How Ridiculous’, which performs tricks and shares them on social media. They took the shot from the top of the Mauvoisin Dam in Valais, Switzerland.

How Ridiculous previously set the record in 2011 for the highest shot from 66.88m from a tower above the Western Australia Cricket Association Ground in Perth, Australia.

They bettered that mark twice, before American trick-shot quintet Dude Perfect took over in May with a shot from 162m from the top of Oklahoma City’s Cotter Ranch Tower.

It was one of those days in March, when a wind starts blowing from nowhere, …