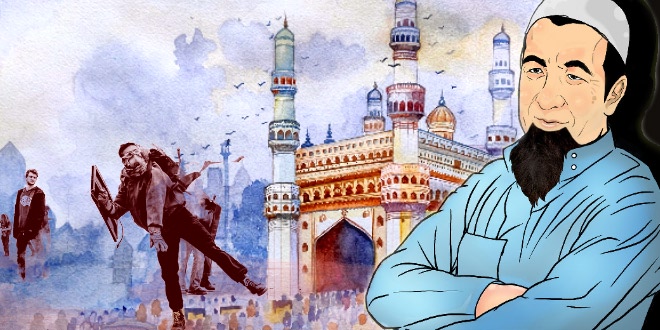 “Time pass chana- phalli,” Hari heard the all-familiar booming voice as he stepped out of the school gate.

“Nampalli, Lingampalli, Kukatpalli, Marredpalli, time pass chana-phalli,” the voice rose above the din. Hari ran towards the owner of the voice.

Shauqat Ali sold chana (gram) and phali (groundnuts) on his cycle. On the stand was fixed a huge basket divided into six compartments. Each compartment contained a tasty mixture of a different flavour. By adding various spices to the chana and phali Shauqat Ali made several mouth-watering ‘items’ as he called them. But more than his ‘items’ Hari liked his style. He was very tall and burly with a thick beard and a booming voice.

Every afternoon when the school closed he would appear at the school gates and start advertising his wares in his classic style: “Time Pass chana phali…

Hari lived in a lane close to Charminar in Hyderabad. His father Narasimha Reddy was a rickshaw puller while his mother Parvati was a maidservant.

He was a class five student and since he studied in a Government High School, his education was free.

“Why were you looking for me Uncle? Anything special?”

“You bet. Today I have made a brand new mixture and can you guess what I have named it?”

Another special feature of Time Pass Uncle’s ‘dishes’ was the unique name he gave to each one.

“I have called my latest creation ‘KBC Special’.”

“Will I become a crorepati if I sample your KBC special?” Hari asked grinning.

“No, but you will definitely feel like a crorepati once you taste it? Here taste my KBC special and tell me how terrific it is?” Time Pass Uncle said handing him a paper packet.

“But Uncle I can’t take your special today?”

“Why? Your stomach is upset, you have ulcers in your mouth, you are fasting?”

“No, no,” Hari said looking down. “I d…don’t have the money. My father has been suffering from fever for the last two days and has not gone to work.”

“Arre Hari beta. Who is asking for money now? Eat and enjoy. You can pay me later. And even if you don’t I won’t really mind. We are friends aren’t we?” Time Pass Uncle said extending his large hand. Hari took the packet. “Thanks Uncle.”

He popped the mixture in his mouth and exclaimed, “Wah Uncle! Mast hai!! I have not eaten anything so tasty in my life.”

“Here have some more,” Time Pass Uncle said grinning from ear to ear.

A few weeks later Hari’s maternal grandmother Amamma came to stay with them. She was very fond of Hari and he would spend most of his time with her.

“You know Amamma today Time Pass Uncle made another special mixture. He has named it Super Sachin and it is really super.”

“I have given him that name. His actual name is Shauqat Ali.”

“But Hari you should not eat anything given by a Muslim. ”

“They cannot be trusted. He might poison you or put some drugs into his mixture and get you addicted.”

“Come on Amamma. He is my friend. How can you even think of such a thing?”

“I can never trust a Muslim. I forbid you to eat what he sells.”

“I don’t care what you think. Time Pass Uncle is my friend and I will eat what he gives.”

“Then I’ll tell your parents to stop you,” Amamma said and getting up walked away in a huff.

A few days later Amamma went back to Barkatpura where she stayed with her eldest son.

That evening Hari told his mother about Amamma’s views about Time Pass Uncle.

“Amamma told me. I don’t agree with what she says. But you should know the reason why she thinks so. When my younger brother, your mama Yadgiri, was fifteen years old there was a riot in Karimnagar. He and two of his friends were returning home when they were chased by group of Muslims and stabbed. He died on the spot. We could not even get his body. Since that day Amamma doesn’t trust Muslims – she hates them.”

“But ma, Time Pass Uncle is not like that. He is very fond of me.”

“I know son. That is why I am not stopping you. I believe that neither are all Muslims bad nor all Hindus good.”

Six months later Hari and his parents were sleeping in their one room house when there was a loud noise. Hari woke up with a start. Someone was banging the door. Narasimha opened the door. It was his Uncle Linga Reddy. He looked excited.

“Narasimha, there is a riot. Some one threw a petrol bomb in the Masjid. Muslims are out on the streets. Take everyone and escape as fast as you can?”

“Go to Nampally station. In such times it is a far safer place then either houses or streets.”

Within ten minutes Narasimha was driving his rickshaw at a feverish pace in the lanes and by lanes of Charminar. Hari and Parvati were huddled inside the rickshaw and the curtain was drawn. Hari was terrified. He had never been this scared in his life. He clung to his mother as they were knocked from side to side, every time the rickshaw took a sudden turn.

The rickshaw braked to a halt, sending Hari lurching forward. He pulled the curtain aside and poked his head out. It was pitch dark outside. He could make out a tall, well built man. In his hand was a long knife.

“You kafir. I’ll first chop your head off and then take your rickshaw,” the giant growled and sprang forward.

“Time Pass Uncle,” Hari screamed and before Parvati could stop him jumped out.

The giant froze for a few seconds and then lumbered forward.

“Y…yes Uncle. This is my father and my mother is inside.”

Shauqat Ali looked at Hari and then Narasimha.

“Get into the rickshaw. Quick,” he snapped at Narasimha.

“There is no time to argue. A mob is coming this side. The three of you will be butchered. Get in and stay quiet.”

Narasimha and Hari squeezed into the rickshaw.

Shauqat Ali climbed on to the three-wheeler and started pedalling furiously.

After around ten minutes they could hear shouting, screaming and sounds of doors and windows breaking.

“Shauqat mian. So you managed a rickshaw,” they heard a shout.

“Yes, Afzal bhai. Though I would have preferred an auto, something is better than nothing.”

Hari could not remember how long he sat cramped in the rickshaw. It seemed like hours. Finally the rickshaw stopped.

Narasimha jumped down and helped his wife and son out.

They were in a wide lane, lined by shops on either side.

Shauqat Ali walked a few steps and stopped in front of a shop. He bent down, unlocked the shutter and pulled it up. “This is my Uncle’s shop. Right now he is using it only as a store. You are safe here. I will be locking the shop from outside. Till I come stay put.”

He shepherded then inside, took the rickshaw in and after pulling down the shutter left.

Hari looked around. It was quite a large room. A number of boxes were lying around.

They sat huddled together. Hari did not realize when he fell asleep. When he woke up it was morning. The sunlight was filtering through the ventilator.

After sometime the shutter was pulled up. Shauqat Ali entered and pulled the shutter down. He was carrying a cloth bag.

“I have brought something to eat for you. It is not much, but that is all I could get. There is curfew in the city.” He left a few minutes later after pulling down the shutter.

The whole day the three of them sat quietly waiting for Shauqat Ali to come.

He appeared in the evening after dark.

“The curfew has been relaxed for two hours. You can go now?”

“No. That is where it all began. Don’t you have relatives elsewhere in the city.”

“Yes, that place will be safe. Go as quickly as you can. You have to reach before the curfew is lifted,” Shauqat Ali said .

Hari and Parvati got into the rickshaw and Narasimha wheeled the Rickshaw out.

“Shauqat bhai, I don’t know how to thank you. You saved our lives,” Parvati said.

“You are calling me bhai and then thanking me.”Shauqat said looking at Parvati. “If Hari had not called me I would probably have killed Narasimha. I had a son, his name was Rahmat. In Hari I see my son. He was Hari’s age when he died.”

“There was a Hindu-Muslim riot in Hyderabad. My father was coming out of the Masjid with Rahmat when a mob attacked the Masjid. My father and son both were killed by Hindus,” Shauqat said and after patting Hari on his cheek turned and walked back.

What does kafir means?

Built in Indo-Islamic architectural style, Charminar is a limestone, granite, pulverized marble and mortar structure with four embellished minarets attached to the four arches. Only a year after the city of Hyderabad was founded in 1591, the construction of the Charminar was concluded. This 14,000 tonne building meant to serve as a madarsa and mosque was built in a way that on opening the fort doors, the minarets would loom out and throw open the entire expanse of the bustling Hyderabad city around it. A square base with 20-metre-long sides and four arches that open into the four streets with each minaret on the corner, Charminar stands out for these ornate 184-foot minarets that are rich in detailing and come with a double balcony. On top of each minaret is a bulbous dome, but Charminar’s minarets unlike the Taj Mahal’s are attached to the superstructure.

Not just Charminar’s strategic positioning or its significance in the history of Hyderabad, the structure still holds visitors in awe for its elaborate stucco work, and the fluidity in the placement of the balconies and balustrades. Legend has it that Muhammad Quli Qutb Shah built an underground tunnel connecting Charminar to Golconda Fort as an escape route in case of a siege. Though the location of the tunnel has not been ascertained till date.

In Qutb Shah’s reign, the western end of the open roof was a mosque while the remainder of the space served as a court. To get to the upper floor, there is a fleet of 149 steps. But it is the top floor of the four-storey building that houses the mosque. Charminar has two galleries one on top of the other, and over them is the terrace that comes with a stone balcony. The open space in the main gallery is meant for the Friday prayers.

Over the years, several changes were made to the structure, the most significant one being the addition of the giant clock in 1889.