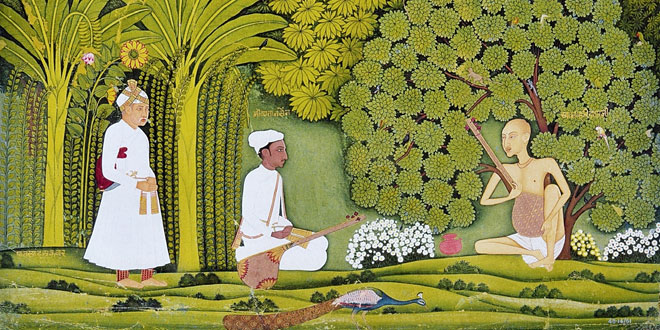 Slowly, gently, the exhausted musician laid his tanpura on the carpet. The exquisite strains of raag darbari still vibrated within the hall. Emperor Akbar looked up, his eyes lit with admiration. “Wonderful!” he said. “Superb! I listen to you every day, but I can’t seem to have enough!”

“I think you have the most wonderful voice in the world!” said Akbar.

“But I don’t, Shahenshah!” said Tansen with a smile. “There is someone who sings far better than I do.”

“Really?” cried the disbelieving Akbar. “Then I must have him sing in my court. Can you arrange it?”

Tansen shook his head. “I’m afraid he will not come, Sire.”

“What! Not even if he hears that the emperor himself summoned him?”

This reply would have enraged any other emperor. But Akbar was different. “Very well, Ustadji,” said Akbar, smiling into Tansen’s half-scared eyes. “If he doesn’t come, I shall go to him myself. Will you take me to him?”

“Yes, Sire, provided you do not come as the emperor of Hindustan.”

“I shall go as a humble lover of music.”

Sant Haridas was the man Tansen had spoken of. He had been Tansen’s music teacher, and he lived the austere life of a hermit. When Tansen and the emperor reached his hut, he was busy with his daily chores. When they asked him to sing, he smiled but said firmly, “I am long past the age for singing.” Even his favourite pupil could not persuade him to change his mind.

But Tansen knew how to get round him. He offered to sing before his guru. And he made a deliberate mistake. “That’s not the right note, Tansen,” cried his teacher, amazed. “What has happened to you?”

Tansen did not seem to understand his teacher and he made the same mistake again. Exasperated, Sant Haridas took the tanpura from Tansen’s hands and sang the right note. Then he went on to the next and the next!

The melody of his voice spread across the forest, like the first glimmer of dawn or the fragrance of jasmine. Both Akbar and Tansen listened to him as if they were hypnotized, and the emperor realized that Tansen had spoken the truth. He had not known that music could be like this! He had certainly never heard anything like it before.

As they walked back, the emperor suddenly broke the silence to ask Tansen, “Why can’t you sing like him, Ustadji?”

Tansen smiled. “Shahenshah, I sing at your command – the command of the emperor of Hindustan. But Guruji sings for one who is king of kings! His music springs from the depths of his soul, free and unasked for. How can my music hope to reach those heights?”