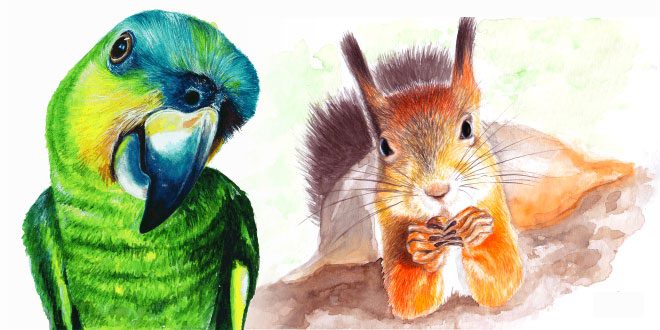 Pinku, a little squirrel was fond of placing bets with her friend Tutu parrot. However she always felt disappointed, as she always lost the bet. Poor Pinku was forced to offer five of her favorite nuts in return.

All her friends advised her to avoid any further betting but Pinku used to remain silent with a faint smile.

Tutu had lost one of his paws in a sharp dense bush. Some of his wings had also been damaged, so he used to move with great effort and difficulty.

The entire group of squirrels always made fun of Pinku as she had not won even a single bet against Tutu.

There was a lot of activity and buzz around the jungle as winner of annual award for “LOVING AND KIND HEARTED SOUL” was to be announced.

Everyone in the forest was quite sure that like previous two years, the award was expected to go to Melody sparrow. Melody was known all around the jungle as kind and noble soul. She was always present whenever anyone needed her help.

When the winner was announced, the result was not surprising at all. The Jury had declared Melody as winner.

Melody was called on the stage to receive her prize. When she arrived on stage, she announced – “I think, Pinku is a deserving winner this year.”

Everyone got surprised by this unexpected announcement.

“Everyone knows that Tutu needs help because of his physical shortcomings. He even needs support to arrange his food. No one gives him company when he wants to play.” Melody replied

“But no one has ever noticed that Pinku places a bet with Tutu everyday only to lose and share her nuts with him.” She continued.

Melody stopped and then said – “Has anyone ever thought why such a sharp squirrel who can run so fast loses a bet every single day to a helpless parrot?”

I bet no one here can defeat Pinku so easily…

The emotional words of Melody moved everyone to tears and everybody looked back to find Pinku standing in a corner gladly supporting Tutu.

And Then king Lion announced – “Come here Pinku. You deserve this award.”

Pinku smiled at Tutu and together they strolled towards the stage to receive the prize.

Previous Motivational Story about School Friends: My Friend and I
Next Three Ms for Freedom: Story of Young Freedom Fighters