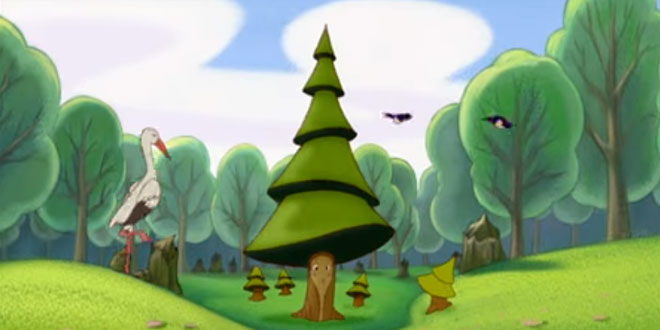 “I won’t tremble to-morrow,” thought the Fir-tree. “I will enjoy to the full all my splendour. To-morrow I shall hear again the story of Klumpy-Dumpy, and perhaps that of Ivedy-Avedy, too.” And the whole night the Tree stood still and in deep thought.

In the morning the servant and the housemaid came in.

“Now, then, the splendour will begin again,” thought the Fir. But they dragged him out of the room, and up the stairs into the loft; and here in a dark corner, where no daylight could enter, they left him. “What’s the meaning of this?” thought the Tree. “What am I to do here? What shall I hear now, I wonder?” And he leaned against the wall, lost in reverie. Time enough had he, too, for his reflections; for days and nights passed on, and nobody came up; and when at last somebody did come, it was only to put some great trunks in a corner out of the way. There stood the Tree quite hidden; it seemed as if he had been entirely forgotten.

“‘Tis now winter out of doors!” thought the Tree. “The earth is hard and covered with snow; men cannot plant me now, and therefore I have been put up here under shelter till the springtime comes! How thoughtful that is! How kind man is, after all! If it only were not so dark here, and so terribly lonely! Not even a hare. And out in the
woods it was so pleasant, when the snow was on the ground, and the hare leaped by; yes–even when he jumped over me; but I did not like it then. It is really terribly lonely here!”

“Squeak! squeak!” said a little Mouse at the same moment, peeping out of his hole. And then another little one came. They sniffed about the Fir-tree, and rustled among the branches.

“It is dreadfully cold,” said the Mouse. “But for that, it would be delightful here, old Fir, wouldn’t it?”

“I am by no means old,” said the Fir-tree. “There’s many a one considerably older than I am.”

“Where do you come from,” asked the Mice; “and what can you do?” They were so extremely curious. “Tell us about the most beautiful spot on the earth. Have you never been there? Were you never in the larder, where cheeses lie on the shelves, and hams hang from above; where one dances about on tallow-candles; that place where one enters lean, and comes out again fat and portly?”

“I know no such place,” said the Tree, “but I know the woods, where the sun shines, and where the little birds sing.” And then he told all about his youth; and the little Mice had never heard the like before; and they listened and said:

“Well, to be sure! How much you have seen! How happy you must have been!”

“I?” said the Fir-tree, thinking over what he had himself related. “Yes, in reality those were happy times.” And then he told about Christmas Eve, when he was decked out with cakes and candles.

“Oh,” said the little Mice, “how fortunate you have been, old Fir-tree!”

“I am by no means old,” said he. “I came from the woods this winter; I am in my prime, and am only rather short for my age.”

“What delightful stories you know!” said the Mice: and the next night they came with four other little Mice, who were to hear what the tree recounted; and the more he related, the more plainly he remembered all himself; and it appeared as if those times had really been happy times. “But they may still come–they may still come. Klumpy-Dumpy fell downstairs and yet he got a princess,” and he thought at the moment of a nice little Birch-tree growing out in the woods; to the Fir, that would be a real charming princess.