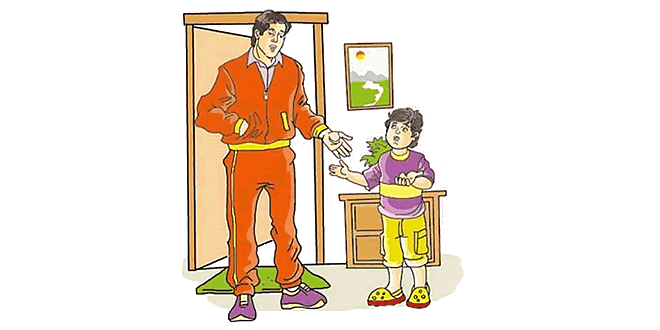 Papa was surprised, “But you had bought a new ball of your choice yesterday”.

“Yes but Suraj did not like that ball” Vasu replied.

“But why should you worry about that if you like that”.

“Now I need a red ball” Vasu hugged his father.

“Alright… we will get a red ball tomorrow for Vasu” his father patted his back.

Next day when his dad returned from office, he found Vasu waiting at the door.

“I hope you remember your promise” Vasu asked.

“Of course” his dad assured him.

“And… I have to buy a pencil box also” Vasu requested.

“This will be third pencil box for Vasu bhaiya in two months” little Shanu said.

“Third… but why”? dad was surprised.

Vasu spoke in a low voice, “My friends did not like those”.

“Yes I know everyone has a different choice” dad asked Vasu.

“But I promise that I will not ask for anything further”.

“I know he will ask for something else” little Shanu laughed.

Dad took Vasu to the market and he bought a new red ball and a pencil box.

Vasu was very happy and excited.

When he was showing his new pencil box to his mom he noticed Balu, little son of their maid Pushpa who was playing with an old, broken plastic toy car.

“Oh, Balu throw away that car. I will give you a new one” Vasu advised Balu.

“But I like this car and why should I throw it away” Balu replied.

“And that ball of yours is in such bad condition.” Vasu continued.

“But how does it make any difference. I am quite happy.” Balu bounced his ball on the floor.

He pulled his father’s hand, “Let us go and return these things”.

“We must buy a new doll for Shanu. I haven’t seen any doll for her” Vasu was smiling.