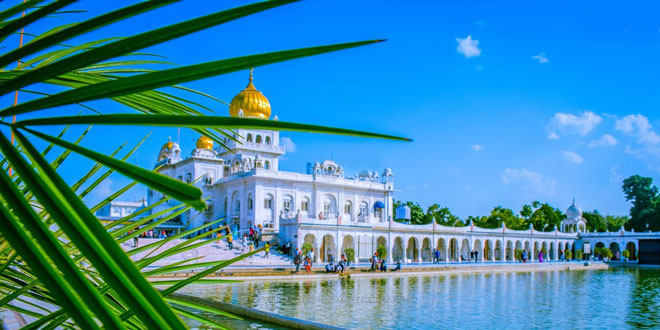 Bangla Sahib Gurudwara is one of the most famous holy shrines of the Sikhs. It is located near the bustling Connaught Place, New Delhi. This towering and spacious gurudwara was once a palace but was later transformed into a shrine in memory of Guru Har Kishan, for his selfless service to humanity and fearlessness. The gurudwara, with its golden dome and Nishan Sahib, a very tall flagpole, looks very stunning, and it is said that every day more than ten thousand people visit the shrine. In the compound, there is a school for girls, an art gallery, a pond, a bookstall, a hospital, a library and Baba Baghel Singh Museum. The water of the pond is considered to be very holy by the devotees of the shrine and it is treated as ‘amrit’. That is why devotees take a dip in the pond before entering the shrine. On entering the premises, one can see that the complete atmosphere is very pious, positive and peaceful. The chanting of Gurbani resounds through the air throughout the day.

In the 17th century, what is now known as the Bangla Sahib Gurudwara was the palace of Raja Jai Singh of Jaipur, and was known as Jaisinghpura Palace. In 1664, the eighth Sikh guru, Guru Har Krishan, stayed there during his tour of Delhi. In that year there was an epidemic of small pox and cholera. Guru Har Kishan helped the sufferers in every way by providing them with aid and giving fresh water from the palace well. Legend has it that those who drank the water were cured. That is why people even now believe that the water of the pond, which was constructed over the well, is blessed with miracles. Because of his mingling with disease affected people, Guru Har Krishan was also infected and he died on 30th March, the same year.

After the death of the Guru, Raja Jai Singh constructed a tank over the well, which is now known as ‘Sarovar‘. He also donated the palace to the Sikh community to be converted into a gurudwara. In 1783, a Sikh general, Sardar Bhagel Singh built a small worshiping place on a part of the palace. Sardar Bhagel Singh is also famous for supervising the construction of nine Sikh shrines in Delhi for which a museum is named in his honor in the premises of Bangla Sahib Gurudwara. Later the entire palace was converted into a Gurudwara.

Inside the Gurudwara, at the center of the hall is kept the holy book of Sikhs, the Guru Granth Sahib, on top of a bed of silk and flowers. The golden dome, the most eye-catching of the shrine, is gold plated and very beautifully carved. The gurudwara is very well constructed with marble floors, and the pillars and the walls are embellished with floral designs and the holy mantras of the Sikhs.

Tens of thousands of people, from all parts of India, congregate at the shrine during the birth anniversary of Guru Har Kishan and the death anniversary of Maharaja Ranjit Singh. There is also one community kitchen known as Guru-ka-Langar, which provides langar to visitors every day. The art gallery which is at the basement of the gurdwara is very popular among the visitors. In this art gallery there are paintings which depict the history of Sikhism and the Sikh Gurus.

In North India, summers are very hot so the best time to visit the shrine is from October to March as at this period the climate is very pleasing and enjoyable.

Delhi has a very big airport. The Indira Gandhi International airport is in the southwest part of central Delhi and is 23 kilometers away from main Delhi. It has the facility of both international and domestic flights.

The capital is very well-connected with almost all the parts of the country. The shrine is at a walking distance from the New Delhi railway station, while from the Old Delhi station you can hire a taxi or an auto-rickshaw to reach the shrine.

Buses are the most essential means of travelling in and around the city. Public and private buses are available from all states like Rajasthan, Haryana, Punjab, Uttar Pradesh and Madhya Pradesh. After reaching the main bus stand known as Inter State Bus Terminus (ISBT), you will easily get a bus to the shrine.

Metro has made travelling in Delhi very easy. After getting down on the railway station you can take the metro till Rajiv Chowk and from there the gurudwara is at a walking distance. When you reach ISBT which is also known as Kashmiri Gate, take the metro to Rajiv Chowk.

Bangla Sahib Gurudwara is a pilgrimage shrine where thousands of people come to take the blessings of Waheguru, the supreme creator. However, it is a holy place for Sikhs but people of every caste and religion come here to visit the shrine. At this place, everyone is treated equally and it doesn’t matter that a person is rich or poor. It is one of the most beautiful structures in New Delhi.