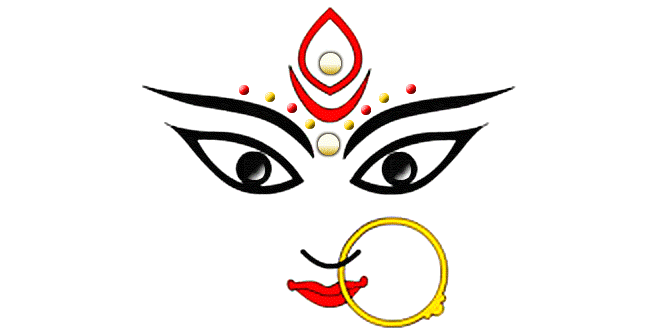 Second Day of Durga Puja: Durga Ashtami or Maha Ashtami is one of the most auspicious days of five days long Durga Puja Festival. In India fasting is undertaken by many people on this holy occasion. This day is also known for ‘Astra Puja’ (Worshiping Weapons) as on this day the weapons of Goddess Durga are worshiped. The day is also known as Vira Ashtami as there are seen to use arms or martial arts on this day.

On the ‘ashtami day’ I had repeated after the priest,
The Sanskrit mantras of his holy chants,
And offered floral tributes at goddess Durga’s feet,
Invoking her blessings never to accept defeat,
And her ‘shakti’ in our fight against the devil,
A final triumph of good over all evil!

I had also prayed for inner strength,
To cleanse my mind, my heart and soul;
To free myself from anger, hatred and greed,
The goddess’ blessing to make me whole!

Most of us fail to realize, that the those things
we throw into other’s life,
Boomerangs back into our very own!

On this great ‘asthami day’, may the goddess
also grant me empathy,
And the power to heal my patients, through my
skill of homeopathy!

The eighth day of Navratri or Durga Puja celebrations is known as Durgashtami, or Durga Ashtami. It is also known as Mahashtami and is one of the most auspicious day according to Hinduism. It falls on bright lunar fortnight Ashtami tithi of Aswina month according to the Hindu calendar.

It is believed in some regions, the Goddess Chamunda appeared on this day from the forehead of Mother Durga and annihilated Chanda, Munda, and Rakthabija (the demons who were associates of Mahishasura). The 64 Yoginis and Ashta Nayikas or matrikas (the eight ferocious form of Goddess Durga) are worshiped during the Durga Puja rituals on Mahashtami. The Ashta Nayikas, also known as Eight Shaktis, are interpreted differently in different regions of India. But ultimately, all the eight goddesses are incarnations of Shakti. They are the same powerful Divine Feminine, representing different energies.