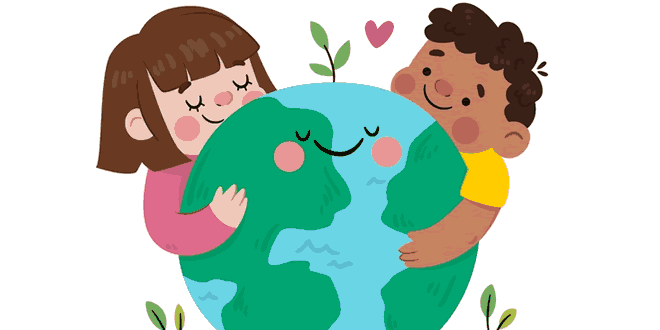 Our Earth: Mother Earth is clearly urging a call to action. Nature is suffering. Oceans filling with plastic and turning more acidic. Extreme heat, wildfires and floods, as well as a record-breaking Atlantic hurricane season, have affected millions of people. Now we face COVID-19, a worldwide health pandemic link to the health of our ecosystem.

Climate change, man-made changes to nature as well as crimes that disrupt biodiversity, such as deforestation, land-use change, intensified agriculture and livestock production or the growing illegal wildlife trade, can increase contact and the transmission of infectious diseases from animals to humans (zoonotic diseases) like COVID-19.

The Earth is ours to enjoy
For every little girl and boy.
But we must always be aware.
That all its beauty we must share
With all the children yet to come,
Who want to laugh and play and run
Around the trees and in the fields.

So we must keep our planet free
From messy trash and debris
With air that’s clean and fresh and clear
For all to breathe from year to year.
We must never ever abuse
Our sweet Earth that’s ours to use.

The history of Earth Day begins during a time when the U.S. was experiencing both political and economic ups and downs. During the 1970s the country was divided over the participation of the U.S. in the Vietnam War. The economy was on the move, but it was costing the environment in a big way. Americans were driving large cars that ran on leaded gasoline. Factories, chemical plants, oil industries were booming but so was the production of air pollution and environmental waste. Unlike today, the health of the planet was not a high priority for most people primarily because they were unaware of the dangerous side effects of common everyday practices.

Small groups of individuals were, however, aware of the deterioration of the world around them and began to take steps to inform the public. In 1962 author Rachel Carson published her book ‘Silent Spring,’ which painted the picture for the environmental decline and raised awareness about preserving the planet. The devastating oil spill in Santa Barbara, California in 1969 was the final push Wisconsin Senator Gaylord Nelson needed to launch his campaign for safer industrial practices.