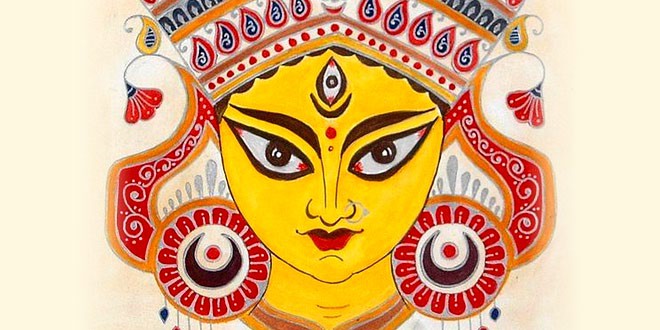 Durga Puja of Bengalis: Durga Puja is one of the most famous festivals celebrated in West Bengal state of India and particularly in Kolkata, in honour of Goddess Durga during the period of Navratri. It is celebrated for 10 days, however starting from the sixth day until the ninth day, the Pandals with grand idols of Goddess Durga are open for visitors. The tenth day, also known as Dashami marks the Visarjan (immersion in water) of the idol with grand celebrations and processions.

The month of October-when the sky is clear,
And the days go on gayer,
The land gets filled with ‘Kash’ flower;
Nothing’s left out from joy- mountains, lakes and bower.

The puja is felt from the day of Mahalaya,
The Bengalis remain busy making pandals of ‘Mahamaya’;
A good crowd throngs the clothes’ shop and shopping mals
There’s a good demand there for shirts, sarees and shawls.

The clubs in the town
Busy in building Puja gowns
To put other pandals down;
The Chaturthi, Panchami, and Sasthi prepare us for the enjoyment

The day of Saptami provides the joy basement.
Asthami and Navami pass in freshness
Just as a stick of incense.
The fourth day closes the joy shell
Still Dashami is celebrated quite well
Dancing and merry making follows the last journey.

Oh! The crackers make the night so sunny
Down casted hearts return from water
But a thing makes our hearts better –
The thought of Diwali that follows soon after.

Durga is one of the goddesses in Hinduism and is a form of Devi, the supreme goddess. In Bengal, she is said to be the mother of Ganesha and Kartikeya as well of Saraswati and Lakshmi. She is considered a divine mother, a guardian, and a warrior who protects divine law and righteousness, and these are her main roles.